Emirates Airline president Tim Clark is not convinced Boeing is “out of the woods yet” with regards to the certification programme for the 777X, as he awaits definitive details on when deliveries will begin.

The Dubai carrier is launch customer for the baseline 777-9 variant of the 777X, which began flight-testing in on 26 January after development delays.

However, Boeing disclosed last month that the programme was being delayed again, with deliveries now scheduled to begin in 2022 – two years later than planned at launch. And Clark says that while the delay could be seen as beneficial amid the current industry crisis, it is not necessarily the case if there is a rapid rebound next year.

“It will suit Boeing to slow the programme down a little bit. I’m not sure they are out of the woods with regards to the certification programme, given what’s gone on with the Max,” Clark told FlightGlobal in an interview. “I haven’t had an update of where the [GE Aviation GE9X] engine is at the moment in terms of the problems it had in the early part of last year.”

Clark believes the 777X will be affected by the Federal Aviation Administration’s increased scrutiny on certification in the wake of the 737 Max accident, with regard to derivative aircraft approved under the FAA’s “changed product rule”. 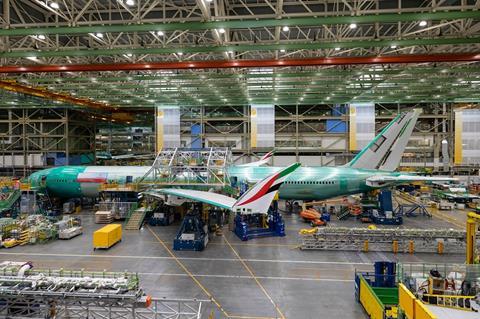 “Unfortunately for Boeing, the 777-9 is the first aircraft to evolve after and during the Max saga, and whether or not it is absolutely perfect, the regulators are going to be absolutely demanding on what’s going on. So when they say 2021/22 [delivery], we’ll see.”

Emirates, which is in negotiations around the 777-9’s revised schedule, “can no longer be kept at bay on [delivery] promises” from Boeing, says Clark. “We’ve now got to know, particularly in light of the Max, that the [777X] will be fully certified and meet all the certification requirements. Boeing’s main task is to get to that stage.

“If they have… imbedded software into the 777X that we do not know about or is dissimilar to what is already on the 777-300ER, then we need a full and transparent explanation,” he adds.

“When they are ready to present to the regulators and it gets to certification, then I think they need to have meaningful discussions as to what the delivery timespan is going to be. After all, the Max was, if you remember, going to be a “two-week fix” in March of last year.”

Clark says that while the delivery delay “probably” suits Emirates in the short term because of the crisis, the outlook could suddenly be very different in certain “rebound scenarios”.

“If in 2021 there is a vaccine rolling out and you get a tsunami in demand, and there has been an elimination of 30% long-haul capacity… then those airlines that are still in a good position to take advantage of it will need all the tools in the toolbox, which means the -9 could have been coming into play for us,” he says.