Russian airframer Irkut has completed fuselage assembly of the first MC-21 to be fitted with the domestically-built Aviadvigatel PD-14 engine.

Irkut states that the fuselage sections of this aircraft have been mated, and the work programme will turn to wing and empennage completion. 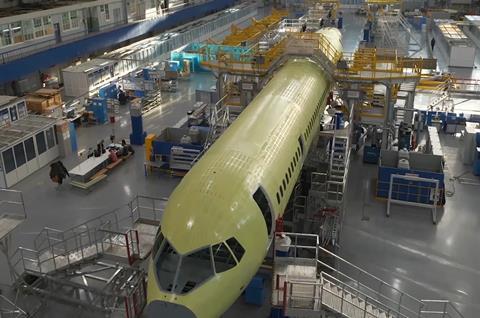 Four flight-test MC-21-300s have already been assembled, all of them powered by the Pratt & Whitney PW1400G.

But the PD-14, manufactured by Perm Motors, is available as an alternative option.

The powerplant secured Russian certification last year and two initial engines have been acquired by Irkut for MC-21 testing. Irkut is intending to obtain European Union Aviation Safety Agency approval for the powerplant.

Aviadvigatel says the PD-14 offers competitive advantages including lower exhaust temperatures and reduced drag through its smaller fan – the PD-14 fan is 190cm compared with 206cm for the PW1400G.

Aeroflot is among the customers potentially set to take the PD-14 version of the MC-21, as part of an order for 50 aircraft.