3
How Soviets decided four was the magic number
Programmes

How Soviets decided four was the magic number

Call it an air transport anachronism, but just as four-engined airliners are slipping, perhaps prematurely, into the realms of nostalgia, Russian airframer VASO is assembling a new widebody quadjet, the Ilyushin Il-96-400M, at its facility in Voronezh.

Featuring a 9.35m (30ft 8in) fuselage stretch from its predecessor, the Il-96-300, the -400M will be capable of accommodating 350 passengers in a two-class interior, and 402 in an all-economy layout. The aircraft will have modernised avionics, precision navigation systems, and higher-thrust Aviadvigatel PS-90A1 engines. The -400M is set to conduct its maiden flight in 2021 – nearly five decades after that of the Il-86, from which the new variant is ultimately derived. 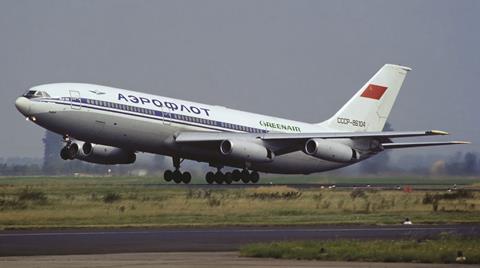 When the Il-86 was conceived, in the early 1970s, it was only the second four-engined widebody behind the Boeing 747. Soviet airliners had previously been configured with embedded wing-root or rear-mounted engines, and 747 design chiefJoe Sutter – who personally knew his Il-86 counterpart, Genrikh Novozhilov – is credited with influencing the notable departure to under-wing powerplants during the Il-86’s development.

But while the Il-86 was intended to provide the Soviet Union with its own widebody candidate, it first flew only in December 1976, lagging six or seven years behind the 747, McDonnell Douglas DC-10, and Lockheed L-1011. One L-1011 was flown to Moscow in March 1974 as part of a pitch to Aeroflot, although no Western widebody would receive Russian certification until the Airbus A310-300 in October 1991.

The application for Il-86 type certification was submitted a few weeks after the L-1011 visit, in May 1974, five months before Moscow was selected as the host for the 1980 Olympic Games. But if the Il-86 was intended to offer high-capacity transport in time for the event, it missed the deadline, obtaining type certification from the Soviet Union’s aviation industry ministry only on 24 December 1980, nearly five months after the Games closed.

Not only was the Il-86 late, its performance was weak. Its payload-range with four engines – the Kuznetsov NK-86 – was around that which the earlier McDonnell Douglas DC-10-10 could achieve with three. But with no political competition, just over 100 Il-86s were delivered to Soviet operators including multiple regional divisions of Aeroflot.

The collapse of the Soviet Union, however, destroyed the market for inefficient widebody designs as Western aircraft with high-bypass powerplants received regulatory approval and the 767 followed the A310 into Russian certification in 1993, while the 747 and DC-10 families were also cleared in the subsequent six months.

While the successor Il-96-300 – with its shorter fuselage, higher weight and crucially greater range – was slotted between them, powered by Aviadvigatel’s PS-90 engine, the appetite for the quadjet proved limited. The weak demand, however, did not deter Ilyushin from experimenting with other Il-96 variants. It conceived a stretched version, the Il-96-400, and a Westernised version of this stretch – the Il-96M, intended to have Pratt & Whitney PW2000 engines.

Ilyushin’s stretch initiative was largely foiled by Aeroflot Cargo’s abandonment of the Il-96T freighter version, which did achieve entry into service, with delivery to Polet Airlines in 2009.

But VASO, in apparent defiance of air transport trends, is persisting with manufacture of the modernised and stretched Il-96-400M. Assembly is nearing completion and VASO aims to transfer the quadjet to the flight-test station at the end of this year.

Ilyushin head Alexei Rogozin was quoted in early 2018 as claiming that the higher fuel burn of the -400M’s four engines could be “more than compensated” for by other factors, including a “very competitive” price.

Only around 120 widebodies are in service with Russian airlines, 10 times fewer than in the USA, which undermines the case for a new type – especially one based on a 50-year-old design.

The Il-96 had been considered as the basis for a proposed Russian-Chinese widebody, before the concept evolved into the CRAIC CR929 twinjet. If the Russian quadjet makes little economic sense, it might nevertheless make a degree of political sense at a time when Russia is pushing to elevate its domestic aerospace industry, while looking for a high-capacity transport option. A first flight will bring a sense of accomplishment and satisfaction that Russia is still part of the exclusive three-member widebody builders’ club.