Mitsubishi Aircraft may be too busy in its MRJ90 regional jet certification campaign to bring one to the Paris air show, but the airframer could be poised to unveil details about a redesign of its smaller MRJ70, nicknamed "The Concept".

Ahead of the biennial event at Le Bourget, Mitsubishi Aircraft chief development officer Alex Bellamy says: "I think it's going to be our best air show." He was speaking to reporters during the opening of Mitsubishi Aircraft's new US headquarters in Renton, Washington on 10 May. One of the major reasons for his optimism is that the 90-seat MRJ90 is progressing towards certification from the Japan Civil Aviation Bureau (JCAB) and the US Federal Aviation Administration (FAA), ahead of its planned entry into service in 2020.

Certification would be a major milestone for Mitsubishi as a new OEM. The MRJ90 will be the first commercial airliner built in Japan since the YS-11 turboprop, first produced in 1962 by the now-defunct Nihon Aircraft Manufacturing Corporation.

But the biggest item to watch out for will be what the airframer says about its plans for the 70-seat market. For several years, Mitsubishi had planned to develop a minimal-change shrink of the MRJ90 in the form of the 76-seat MRJ70. But Bellamy reveals that the company has dropped the MRJ70 name, instead referring to its smaller-capacity solution as "The Concept". Details, however, have been hard to come by.

"What we have been working on is I think fundamentally improved over what the MRJ70 was," he says. "We don't want to let the rabbit out of the hat."

At a broad level, Bellamy says the redesigned Concept is intended to comply with seating and maximum take-off weight limits faced by US airlines – the so-called scope clause in pilot contract that prevents carriers from substituting regional jet pilots for their higher-paid mainline pilots. It will be designed to be "scope compliant but not scope limited" and remains "a derivative of the MRJ90".

At a maximum take-off weight (MTOW) of 39,600kg (87,300lb), the MRJ90 is just above the 39,000kg scope limit for US regional carriers. Mitsubishi at one time might have expected that limit to be raised enough for the aircraft to qualify as a regional jet, but now sees no likelihood of that changing any time soon.

The MRJ90's breaching of the scope limit complicates things for US-based regional carriers SkyWest and Trans States Holdings, which hold around two-thirds of the 223 firm orders for the type. SkyWest has discussed limiting the MTOW of the jet, while Trans States gave the cold shoulder to suggestions it may switch its order to the MRJ70.

Bellamy suggests that since the MRJ70 was first conceived, the market has changed, and regional carriers now require a 76-seat aircraft that can offer a dual-class layout, along with extra-legroom seating in the economy cabin, while also delivering favourable economics.

That is the benchmark that has been set by the 76-seat Embraer E175, a top competitor for Mitsubishi in the US regional market. Although Bombardier's CRJ700 offers a similar capacity in single-class layout, its future remains under a cloud as the Canadian manufacturer could divest its CRJ programme, following its 2018 sale of majority ownership in the CSeries (now the Airbus A220).

Meeting that market need could be necessary for Mitsubishi to become a credible player in the regional aircraft sector, says Rob Morris, head of consultancy at Ascend by Cirium.

"Clearly Mitsubishi must create an MRJ variant which can offer up to 76 seats with 4,000km [2,160nm] range and maximum take-off weight lower than 86,000lb so that they can access US markets limited by scope clause," he says. "The MRJ90 doesn't fulfil this and while the current MRJ70 design does meet the maximum take-off weight limit it cannot offer 76 seats with acceptable range or in two-class."

To become scope compliant, Chris Seymour, head of market analysis at Ascend, suggests that Mitsubishi could perhaps make a "slight shrink of the current MRJ90 with maybe more use of weight-saving materials and some internal changes".

Bellamy says the regional market facing Mitsubishi is "underdeveloped" and "probably a once in a 50-year-lifetime opportunity" because of growing demand for regional aircraft. "There is a great opportunity for revolutionising both the passenger experience and the way airlines think about their regional operations,” he says, adding that the MRJ can reshape regional travel the way Boeing 787 aircraft have enabled airlines to open new routes.

"We've spent a long time talking with airlines" about the redesigned MRJ70, he says, optimistic that Mitsubishi can offer a next-generation product that complies with the scope clauses and economics of the US regional market.

Striking this balance for the revamped aircraft could also appeal to a global market because "outside of the US we have significantly more capability in markets that are not limited by scope clauses", he says. 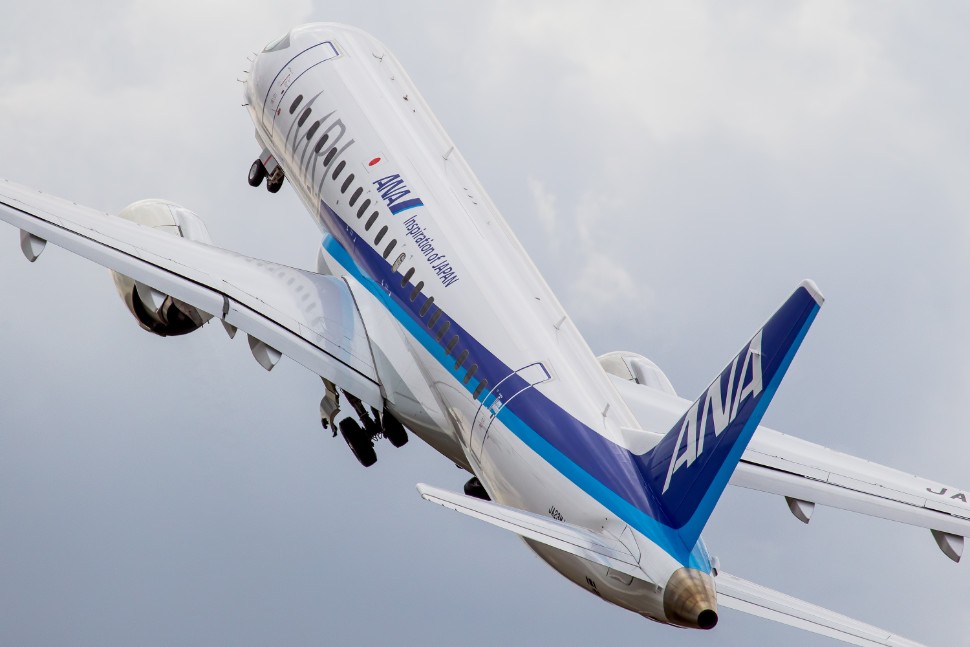 While The Concept remains under wraps for now, Mitsubishi is focusing on certificating and entering into service the long-delayed MRJ90 in 2020, which Bellamy says is "fundamental" for establishing its credibility as a manufacturer. That focus means that the manufacturer will not have one of the aircraft in the flying display at Le Bourget, as it did in 2017, and it is unsure if one can be spared for a short fly-in and display on the static line.

Mitsubishi has four flight-test MRJ90s based at its evaluation centre in Moses Lake, Washington, and a fifth aircraft in Japan that is used for ground tests. The manufacturer plans to add two more aircraft to the flight-test fleet later this year.

Testing for certification by the JCAB kicked off in December 2018, and since then the FAA has joined the programme. They are monitoring Mitsubishi's engineers and pilots to ensure safety tests and data collection are done correctly to assess airworthiness requirement compliance.

"We continue to work closely with the JCAB to also build a set of compliance requirements and processes that exceed the high global expectations for aircraft safety," says Andrew Telesca, Mitsubishi's head of certification management. "During all testing, we are collecting lessons learned and improving integration between our organisations in order to improve efficiency and support not only the certification schedule of the MRJ90, but to also ensure the success of future aircraft development in Japan."

The European Union Aviation Safety Agency (EASA) will participate in flights later in the programme, but representatives from the regulator have participated in other compliance and testing activities at locations including Eglin AFB in Florida, where the aircraft was subjected to extreme temperature trials.

While testing progresses, Mitsubishi is also focused on getting the MRJ90 ready for service in 2020 with launch customer All Nippon Airways (ANA), which has 15 firm orders for the aircraft and options to purchase 10 more, Cirium's Fleets Analyzer shows.

The Tokyo Summer Olympics in July 2020 are forecast to be a major draw for air travel, but Bellamy says despite the pressure to deliver the aircraft by then, "we are working with ANA to make sure we are entering into service smoothly". To prepare, the first MRJ simulator built by CAE is expected to be installed at Mitsubishi's Haneda flight training centre in the coming months. It will be certificated to Level-C, allowing pilots to obtain their type ratings for the new jet.

The Pratt & Whitney 1200G geared turbofan engine is custom-built for Mitsubishi's regional jets and is the newest version of the engine; Mitsubishi is optimistic over a smooth rollout of the engine.

It may be several years late, but the progress of the MRJ and Mitubishi's rethink of the MRJ70 are set to make the Japanese airframer a company to watch at the 2019 Paris air show.