Terrain-mapping An-140 to commence test flights

Test flights are set to commence with an Antonov An-140 turboprop modified to carry out aerial terrain mapping by Russia’s Myasishchev experimental facility.

The twin-engined aircraft has been adapted with specialised equipment for cartographic work, says United Aircraft.

It states that the An-140 is to undergo a “comprehensive” series of ground and airborne tests to confirm the safety of the aircraft and the operability of the newly-fitted equipment.

The aircraft will be able to carry out high-resolution photography for digital terrain databases enabling creation of three-dimensional models of geographic features.

Myasishchev has previously been involved in geophysical aviation work with the development of its M-55 high-altitude aircraft.

“We are very confident that our new development will also be successful,” says the experimental facility’s managing director Alexander Gorbunov. 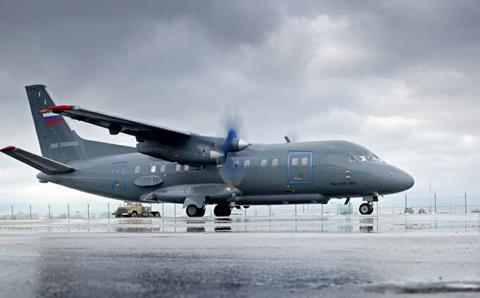 This An-140 has been adapted for high-resolution photography