Antonov is marking the 30th anniversary of the maiden flight of its unique An-225, as it prepares to surrender – possibly – its title of the world’s largest aircraft to another six-engined giant.

For three decades the ‘Mriya’ – the Ukrainian word for ‘vision’ or ‘dream’ – has reigned undisputed, setting several world records.

The An-225 was developed from the four-engined An-124, modified with a stretched fuselage, broader 88.4m wingspan and six Ivchenko-Progress D-18 turbofans capable of delivering over 136t of thrust. 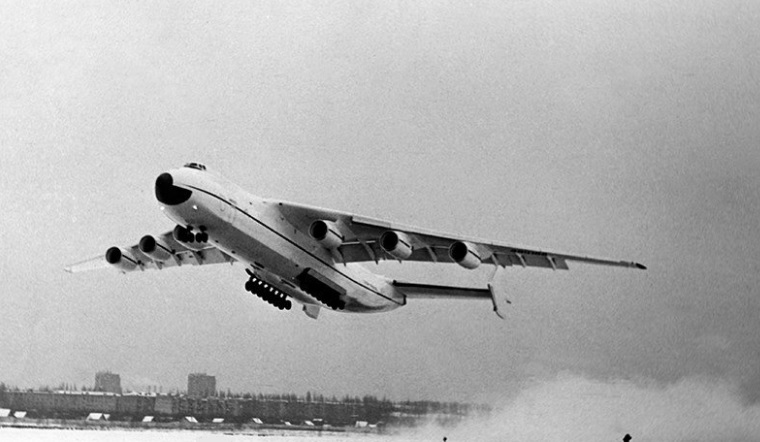 It also featured a characteristic twin vertical fin to provide stability and greater rudder authority during the key operations for which the aircraft was designed – the ‘piggy-back’ transport of outsize payloads up to 250t, notably the Soviet Union’s Energia launch vehicle and Buran space shuttle orbiter.

Flight International reported the roll-out of the An-225 at Kiev in its final issue of 1988, by which time the aircraft had conducted its first flight having lifted off on 21 December.

Full details of the aircraft remained sketchy – the magazine relied photographs of a model to estimate the size of the undercarriage. The An-225 has 32 wheels including 14 on each main-gear assembly.

Like the An-124, the An-225 is loaded through a nose visor, lowering itself for ease of access through a process which Antonov calls the “tantsi slona”, the Ukrainian phrase for “elephant’s dance”.

Development of the aircraft took only three-and-a-half years, according to Antonov and, in its early stages of operation, the An-225 made appearances at the Paris and Farnborough air shows.

Although the An-225’s maiden flight came seven weeks after the first, and only, flight of the Buran orbiter, the aircraft nevertheless demonstrated its ability to transport the shuttle with a flight on 3 May 1989.

Collapse of the Soviet Union, almost exactly three years after the first flight, and abandonment of the Buran shuttle programme left the future of the An-225 uncertain.

The sole aircraft was parked in 1994 and assembly of a second airframe was halted, the incomplete fuselage still mothballed at an Antonov facility in Kiev. While Antonov has previously indicated intentions to finish the second An-225, progress to this end has been virtually non-existent.

But the original An-225 (UR-82060) was given the opportunity to enter commercial service, following a seven-year refurbishment programme which led to restoration of flight testing at Kiev on 7 May 2001 and certification by the Russian Interstate Aviation Committee two weeks later on 23 May.

Only two aircraft have exceeded the An-225’s wingspan. The Hughes H-4 Hercules, which briefly became airborne during its only flight in 1947, and the newly-developed twin-fuselage Stratolaunch, yet to fly, which has a 117m span and is also intended as a transport for space vehicles.

But while Stratolaunch is fitted with six Pratt & Whitney PW4000 engines, and its developer describes it as the world’s largest aircraft, it will be shorter than the An-225 and have a lower payload capacity at 227t – which means, in the giant aircraft stakes, the Ukrainian ‘dream’ lives on.