Irkut has completed a series of water-ingestion tests of the MC-21-300 twinjet at speeds up to 150kt.

The airframer says the testing has confirmed the aircraft is capable of operating on water-contaminated runways.

Irkut performed 29 runs as well as three taxiing tests at Ulyanovsk over the week of 16-22 July, with different flap settings and engine thrust levels – including reverse.

The aircraft, fitted with Pratt & Whitney PW1400G engines, travelled through a pool of water 70m in length and 20m wide.

Irkut says the test demonstrated the MC-21 was able to carry out “safe movement on a wet runway, at a wide range of speeds, without any failure”. The aircraft also remained stable and under control. 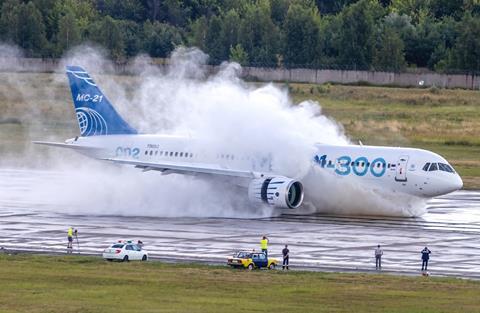 Twenty-nine test runs were conducted at speeds up to 150kt