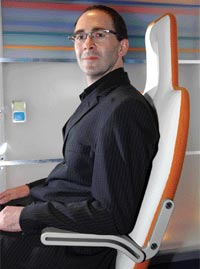 Deep-vein thrombosis (DVT), often caused by sitting too long in one position, is now recognised as a potential killer of long-haul air travellers.

The chair is fitted with miniature sensors that can be linked to the cabin network and a display in the cabin-crew station.

The events of 11 September have suggested a security application, offering early warning of terrorist attack or an air-rage incident. "The sensors could detect a restless passenger, or someone who is agitated and displaying suspicious behaviour," says QinetiQ's David Howells.

In-seat intelligence could also help with basic cabin management, with the system programmed to dim lights when the passenger sleeps and switch them on again when he awakes.

QinetiQ's intelligent seat forms part of its current concept for the airliner cabin of the future. The company is working with Virgin Atlantic Airways to develop the concept further.

Other examples of QinetiQ's aerospace technologies on show include the Raptor airborne reconnaissance system, the titanium metal matrix composite material, and aviation security products based on passive millimetre-wave imaging.