A timely report on the UK’s maritime air power capabilities has claimed the Royal Navy’s new aircraft carrier – officially named on 4 July – is a wise acquisition, based on the strategic advantage the vessel will bring to the nation.

The Royal Aeronautical Society’s paper, Current and Future Maritime Air Power for the United Kingdom, released on 3 July, says although the design and development have been debated in recent years, it remains an advantage for the UK to possess the HMS Queen Elizabeth.

The design of the UK's CVF-class carriers has been called into question in the past. In particular, concerns were raised by the fact that the Lockheed Martin F-35C – a carrier-based design – the UK considered purchasing was not feasible, due to the vessels being too far into development to integrate the aircraft by the time a decision was made. Changing from the short take-off and vertical landing F-35B would have come at too high a cost. 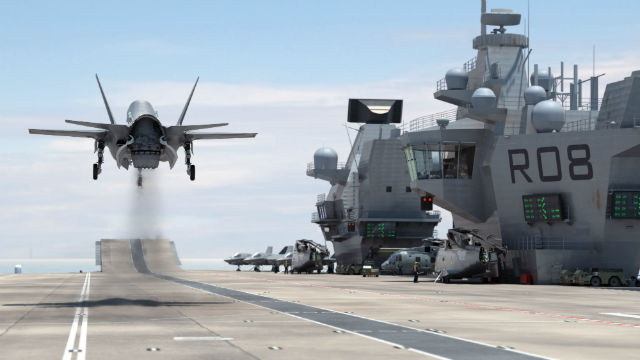 “While the carrier programme was one where the contractual position to some extent forced the Ministry of Defence’s hand, it nonetheless remains the case that there are sound reasons for pursuing such a capability,” the paper states.

It adds that US support for the Queen Elizabeth-class acquisition “becomes clear” when it is considered that the US Navy hopes a UK carrier task group will provide sufficient capability to replace one of its 11 task groups on station.

“Even if it is one task group once a year, this has significant appeal to the US and is an, albeit subtle, lever for the UK with its major ally,” the paper adds.

Despite observing that a larger fleet of escort ships could be more beneficial than the aircraft carrier – and that funding has been stripped from other programmes in order to fund the carriers – “there remain convincing reasons for the UK to take this course of action”, the paper continues.

Few NATO nations operate aircraft carriers, the paper states, although many possess escort fleets, leading to a greater capability for the UK. “This is an intelligent strategy by the UK; NATO’s record of being able to diversify its resources to provide the widest spectrum of capability is not renowned,” it notes.

Allies could potentially use their surface escort vessels in support of the navy’s carrier in combat, or could be deployed on a less demanding mission to allow the carrier to operate elsewhere. “This suggests the Queen Elizabeth-class carriers will offer the UK political leverage out of proportion to the equivalent tonnage of surface escorts,” the RAeS says.

HMS Queen Elizabeth is due to undergo sea trials in 2016 and will become fully operational in 2020, but the future of the navy’s other carrier – HMS Prince of Wales – remains unclear. The 2010 Strategic Defence and Security Review said an option was available for the second carrier to be sold, although no buyers have so far come forward.

“This seems to suggest mothballing the ship looks more likely than a sale,” the paper states.