“We’ve taken the technologies from those two superior systems and we’ve combined them into what you see today, called Peregrine,” he says. 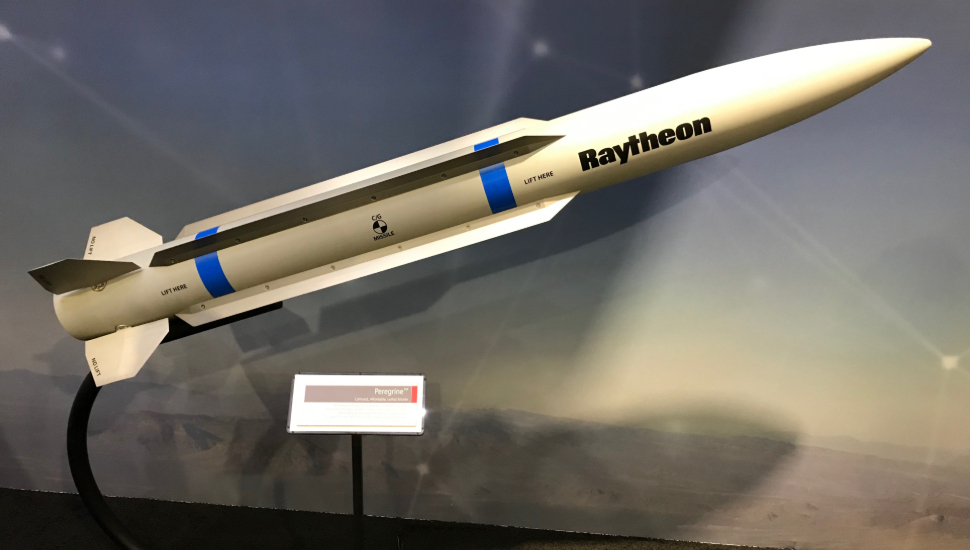 The Peregrine is half the length of the AMRAAM.

The missile gains its manoeuvrability through thrust vectoring technology that is similar to what is used on the AIM-9X, says Noyes. He declines to say the missile’s exact range. The AMRAAM has a range of more than 17.4nm (32km), according to the USAF.

Noyes also notes the missile is autonomous and has a tri-mode seeker, but declines to say what other sensors the weapon is equipped with.

Raytheon did not develop the Peregrine for any specific US military service requirement or programme. It is developing the missile mostly with internal research and development funds, says Noyes.

The missile is “half the size and cost of today’s air-to-air missiles,” the company says. However, Raytheon is not pitching it as a replacement to the AMRAAM or AIM-9X, saying it views the weapon as complimentary.

At about 1.8m (6ft) long and 68kg (150lb) the missile is substantially smaller than its predecessors. For instance, the AMRAAM is 3.7m long.

“On fourth or fifth generation fighters you can double or triple the load out,” says Noyes. “You can at least double the load out on an F-35.”

The Lockheed Martin F-35A and F-35C can carry four AMRAAM’s internally, split between the stealth aircraft’s left and right weapons bay. In May 2019, Lockheed Martin unveiled an in-development missile rack, called Sidekick, that it said would increase the internal weapons load of the F-35 to six missiles in total.

Raytheon says the supersonic Peregrine could be used against drones, manned aircraft or cruise missiles.

The company did not say when the missile would enter production, but indicated it could be put into service quickly.

“The beauty of it is we are using some of our additive manufacturing processes, military off-the-shelf technology, and readily available materials to put this together,” says Noyes. “It’s going to be rapidly produced. It is going to be low risk.”