Rockwell Collins is to lead the development, production and distribution of user terminals for Inmarsat's future Ka-band satellite-supported Global Xpress aeronautical services for the aviation industry, an arrangement that is expected to facilitate game-changing technology in the in-flight connectivity sector.

An agreement in principle, reached last week by the two parties and expected to be finalised before the end of the year, comes after Inmarsat fielded "nearly 20 responses to a request for information", and engaged in deep discussions with a number of companies, Global Xpress managing director Leo Mondale told ATI and Flightglobal today.

"We weighed experience, presence, relationships with the airframers, and worldwide maintenance repair service facilities, and we looked also at credibility and executing programmes on time, and while we had several good proposals, the Rockwell Collins team ticked the box in more areas than anybody else. The focus they demonstrated and energy they put into the process was very impressive."

Inmarsat defines terminal units as inclusive of "everything from the terminal to the antenna", said Steve Timm, vice-president and general manager, flight information solutions for Rockwell Collins. "So virtually all the hardware going on the aircraft is Rockwell Collins' responsibility."

The exclusive nature of the arrangement with Rockwell Collins covers both commercial air transport and corporate aviation, though not government equipment. "We do expect, when we can provide details in the coming months, to benefit from the COTS-type solutions for government markets but there will always be a market for highly customised and tailored antenna solutions and we will work with Rockwell Collins on that," said Mondale.

Inmarsat also expects Rockwell Collins to become one of its Global Xpress service partners. "We're asking them to take a hard look at what Global Xpress supports and expect a line-up of partners to bring to market," he noted.

With the support of Rockwell Collins, in-flight testing of Global Xpress aeronautical services will begin after the mid-2013 launch of the first of three Ka-band satellites, which will form the Inmarsat-5 constellation.

In-flight connectivity service - global except for the poles - for commercial air transport, business aviation and government customers will begin in 2014. 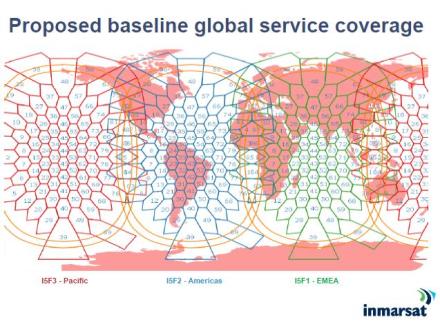 Mondale said Inmarsat is "very confident" it will reach a final agreement with Rockwell Collins, but that the London-based firm felt it was "very important to get the word out to the broader industry that there is serious technology partner involved in this project to give some confidence in the dates we put out there and our stated objectives".

Global Xpress "will be economical, in terms of both hardware and services to the end users, providing the only global Ka broadband connectivity with transmission speeds at least double that of Ku offerings", said Inmarsat.

At present, Panasonic Avionics and Row 44 provide Ku-band-based connectivity to airlines. Gogo serves the US market with an air-to-ground solution. And mobile connectivity providers AeroMobile and OnAir offer service via Inmarsat's L-band services.

A teaming of ViaSat and JetBlue Airways subsidiary LiveTV are working to bring regional Ka connectivity to the US low-cost carrier as well as more than 200 domestic aircraft operated by United-Continental.

"If you look at the [in-flight connectivity] options available today, no one solution really meets the needs of the aircraft, because of coverage, price to airlines, and throughput and speed. Global Xpress does. It has all three legs of the stool being answered. You can replicate that ground [broadband] experience in the air. I think it will generate significant interest across the airlines and the OEMS," said Timm.