Moscow is to offer Brazil an opportunity for joint development of its Sukhoi T-50/PAK-FA stealth fighter as part of an unsolicited proposal for the nation's delayed F-X2 tender, a Russian official has confirmed.

The proposal will be presented by a Russian delegation which is travelling to Brazil and Ecuador from 14-17 October, a source in the delegation told Russia’s RIA Novosti news agency.

“We are ready to offer our partners deliveries of ready-for-sale advanced aircraft like the [Sukhoi] Su-35, but also joint development of a next-generation aircraft of the T-50 type,” the source says. 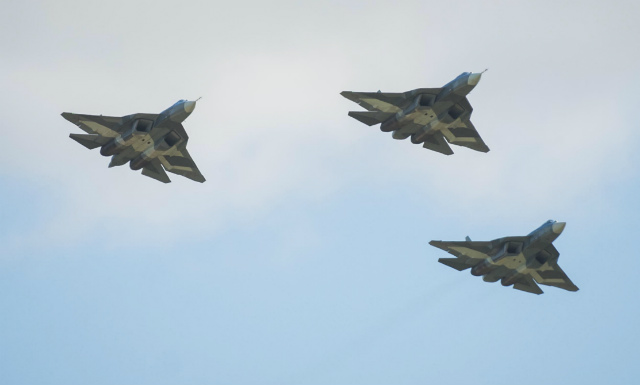 Due to enter service with Russia's air force in 2016, the multirole T-50 features low-observable technology, super manoeuvrability, supercruise capability and advanced avionics including an active electronically scanned array (AESA) radar. Russia and India are already jointly developing a derivative of the type for the latter's air force, to be built by India’s Hindustan Aeronautics.

Three contenders officially remain in the running for the delayed F-X2 requirement: the Boeing F/A-18E/F Super Hornet, Dassault Rafale and Saab Gripen NG, with a Russian offer of the Su-35S having been previously rejected.

According to local media reports, Brazilian President Dilma Rousseff decided late last month to postpone the tender until 2015, after elections that are to be held next year.