A220 diverts after thrust in one engine rolls back on approach

Canadian investigators are probing a loss of thrust on an Air Canada Airbus A220-300 during approach to New York, to which the crew responded with a go-around.

The aircraft had been descending for runway 31 at New York’s LaGuardia airport, following a service from Toronto on 8 November.

But at around 2,000ft the crew received a ‘one engine’ flight-management system indication and the aircraft yawed. The crew carried out a missed approach and ran a checklist.

Transportation Safety Board of Canada says the right-hand Pratt & Whitney PW1500G engine “rolled back” to 30% of N1 and was “unresponsive” to throttle movement. 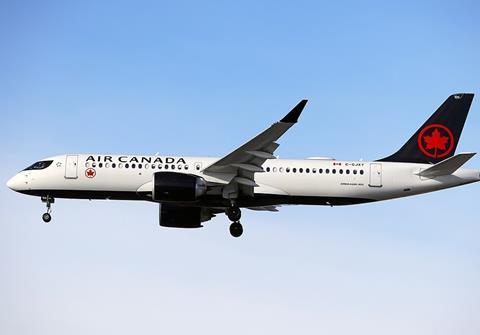 The crew shut down the engine and declared an emergency, diverting to Newark. It flew from Newark to Toronto the following day and appears since to have returned to operations.

Transportation Safety Board identifies the aircraft involved as C-GNBE, which was delivered to the airline new in March this year.