New Airbus A220 crew procedures for landing are being introduced after investigation into a dual-engine shutdown found that abrupt throttle movement can trigger erroneous detection of uncontrolled high thrust.

Canadian investigators have been looking into an incident involving an Air Baltic A220-300 during which both Pratt & Whitney PW1500G engines automatically shut down after the aircraft touched down in Copenhagen on 11 July.

While investigation to determine the root cause is continuing, it states, preliminary findings indicate that an erroneous uncontrolled high-thrust detection can occur above 16,000ft if the thrust lever is “manually and abruptly” moved to the ‘idle’ position.

Abrupt movement of the lever involves suddenly changing its position – from above 80% N1 to idle – in less than 2s, it adds.

Erroneous uncontrolled high-thrust detection during flight might not be annunciated on the cockpit displays but will still result in automatic engine shutdown upon landing – potentially leading to a runway excursion. 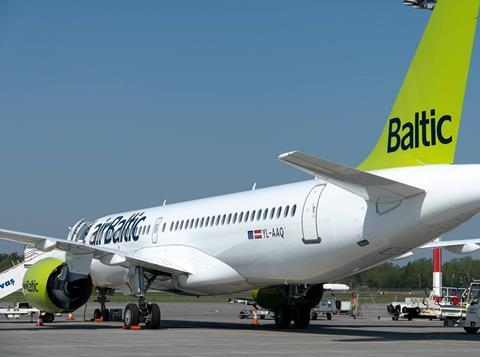 The new procedure directs pilots to take action before landing if an abrupt manual retardation of a thrust lever towards idle is performed above 16,000ft.

It also sets out the operational landing distance factors pilots must use for dry, wet or contaminated runways.

As well as being modified with this normal procedure, the aircraft’s flight manual must also include an abnormal procedure – featuring similar steps – to be carried out if a throttle failure caution for either engine is displayed to the crew.

Investigation into the Air Baltic incident found that the aircraft (YL-AAQ) had reached top-of-descent following a flight from Riga when the crew disengaged the autothrottle. Shortly afterwards, a master caution light indicated right-hand throttle failure and the crew ran an abnormal checklist before continuing the approach.

Transport Canada is ordering modification of the A220 procedures within 30 days, through a directive which takes effect on 9 December.