A320 just 6ft from terrain collision after pressure-setting error

French investigators have disclosed that an Airbus A320 inbound to Paris narrowly escaped colliding with terrain short of the runway, after an incorrect pressure setting given to the pilots went undetected.

Analysis of the serious incident – which took place in poor weather and low visibility – shows the A320 descended to a radio-altimeter height of just 6ft above ground while still 0.8nm from runway 27R at Paris Charles de Gaulle.

French investigation authority BEA states that the intermediate air traffic controller, some 10min beforehand, had instructed the A320 crew to descend to 6,000ft with a QNH altimeter pressure setting of 1011mb rather than the valid figure of 1001mb.

The crew of the A320, operated for Maltese company Airhub, read back this incorrect figure of 1011mb before being given a further descent instruction – again with the wrong pressure setting – and being cleared for an RNP approach to 27R.

BEA says the controller also gave the same incorrect QNH setting to an EasyJet flight inbound to the same runway, but the EasyJet crew read back the valid QNH of 1001mb without asking for clarification. The different readback was not noticed by the controller.

Both the Airhub and EasyJet exchanges were in English. The controller subsequently gave descent instructions to an Air France crew, in French, using the correct QNH figure.

With the QNH level wrongly set, the Airhub A320 displayed the apparent correct altitude to the crew but followed a descent profile which was actually 280ft too low.

“The crew stated that, during the entire approach, they remained in cloud, without visual references,” says BEA.

“They experienced moderate turbulence and flew through heavy rain, using the wipers at high speed.” 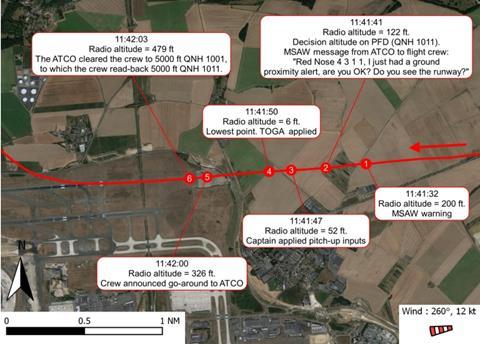 Although the pilots said they conducted altitude-distance checks regularly during the RNP approach, leading them to believe they were on the correct profile, the wrong QNH setting meant the deviation would not have been detected by this method.

After transferring to the tower controller, who cleared the A320 to land, the aircraft descended – on an otherwise-stabilised flightpath – to an indicated altitude of 891ft, corresponding to 617ft actual altitude, while still 1.53nm from the threshold. According to the radio altimeter it was about 200ft above ground and this triggered minimum safe altitude warnings to air traffic control.

“Controllers in the tower could not see the aircraft on short final because of the bad weather,” says BEA.

The tower controller queried the A320 crew a few seconds after the warning, but the pilots had already opted to execute a go-around because they could not see the runway after the jet had descended to the apparent decision altitude.

No warning from the terrain-alert system was recorded during the approach, says the inquiry, and the pilots stated that they did not hear any automatic call-outs from the radio-altimeter other than those at 2,500ft and 1,000ft.

BEA says the inquiry is continuing, and specific system analysis will confirm the presence, or absence, of the call-outs.

Upon being notified of the A320 go-around, the controller told the crew to turn north and climb to 5,000ft on a QNH setting of 1001mb. But the crew read back the incorrect QNH figure of 1011mb, which was not noticed by the controller.

BEA says the controller was subsequently advised by an assistant that the runway approach lights had not been switched on. Following the altitude warning, and the lighting omission, the assistant took over the controller’s duties.

The A320 continued to fly the go-around without its QNH setting being corrected, remaining 280ft below the altitude indicated to the pilots. BEA says the correct setting was given neither to the crew nor other aircraft on the same frequency.

After being handed to an intermediate controller, the A320 was cleared for a second RNP approach to 27R, and the tower controller subsequently cleared the aircraft to land. Its crew sought, and received, confirmation that the approach lights were switched on.

But owing to the uncorrected QNH setting, another minimum safe altitude warning was triggered as the aircraft descended through an indicated altitude of 1,403ft – above 842ft above ground – some 3.1nm from the threshold.

This prompted the tower controller to advise the crew, who could not understand the reason for the alert. The pilots confirmed they had visual contact with the runway, well above the minima, and corrected the flightpath during the final approach – having noted that the precision-approach path indicator lights suggested the aircraft was low on its profile.

The aircraft landed without further incident and none of the 178 occupants was injured. 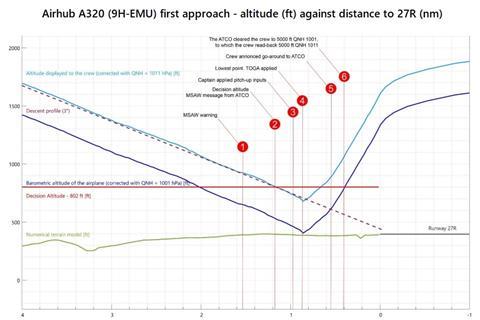 BEA says the approach on 23 May resulted in a “near controlled-flight into terrain” without visual references, at a height of 6ft.

The ILS for runway 27R had been out of service. Crew operational documentation for RNP approaches with lateral and vertical navigation minima mentioned the risks of cockpit altimeters having different settings, but not specifically the risk of having the same incorrect QNH setting on both.

BEA says that, in such cases as the A320 approach, QNH setting errors are “critical”.

“These errors cannot be detected by altitude-distance cross-checks against values provided on the approach chart,” it says. “There is no dedicated item requiring a specific cross-check of the QNH with another source of information such as the ATIS, METAR or confirmation of the QNH with [air traffic control].”

BEA has recommended that the Paris air navigation service and Airhub implement “without delay” a procedure to mitigate the risk of an incorrect QNH setting being used by crews and affecting both altimeters.