A320 landed off-runway at Rio after drifting far from centreline

Pilots of an Avianca Brasil Airbus A320 did not execute a go-around despite the aircraft’s drifting off the runway axis during approach to Rio de Janeiro, and subsequently landing far to the right and travelling onto rough ground.

Although the crew – arriving from Salvador on 3 March 2019 – had been advised of thunderstorm activity, reduced visibility, and heavy rain, the first officer informed the captain that continuing the approach to runway 15 was possible under company rules.

The aircraft was stabilised on the approach by 1,380ft with an airspeed of 140kt and descent rate of 800ft/min, says Brazilian investigation authority CENIPA.

It states that the pilots obtained visual contact with the runway at 800ft but, as the A320 passed 100ft, it encountered heavy rain and a gradual increase in wind strength from the left.

The captain, who was flying, mentioned the aircraft was drifting to the right of the centreline and tried to correct the course initially by applying the rudder while maintaining a wings-level attitude. 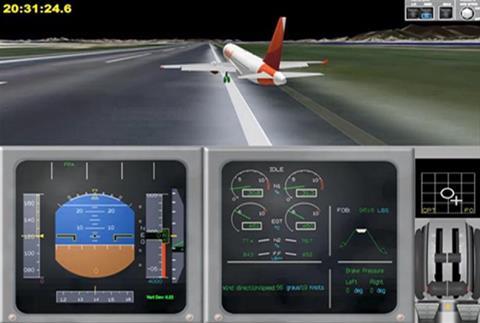 As the A320 passed the threshold at 80ft it was still off the centreline. This was called out by the first officer, to which the captain replied that he was “correcting it”.

CENIPA says a drift from the centreline should be countered with a de-crabbing technique, with a slight bank into the wind if necessary.

But the captain, while applying left rudder, kept the wings level and the aircraft’s drift was uncorrected. The first officer mentioned the alignment twice more, but there was “no response” from the captain, says the inquiry.

“The pressure on the pedals remained the same,” it states. “However, it was not possible to correct the alignment. Throughout the flare, there was no command for correction with the wings, and the bank angle remaining fully levelled.”

Intensifying rain impaired the pilots’ peripheral vision, says CENIPA, compromising their sense of the aircraft’s location with respect to the runway.

“At no time was there a call-out to start the missed approach procedure,” it adds, even though the first officer realised the captain’s efforts were not enough to return the aircraft to the centreline. The crew “chose not to” conduct a go-around despite having “enough information to discontinue the landing”, it says.

While the crew was concentrating on the drift, the aircraft had remained airborne and it eventually touched down 900m past the threshold, with its right main landing-gear outside the right-hand lateral limit of the runway.

The A320 continued to veer onto the grass verge, travelling fully off-runway for over 660m before the crew recovered directional control and steered back onto the asphalt.

While none of the 168 occupants was injured, the aircraft suffered “substantial” damage, says CENIPA. Several blades on both CFM International CFM56 engines were damaged, along with undercarriage components and the VHF antenna, the fuselage was dented and scratched, and multiple aircraft systems were contaminated by grass and mud. 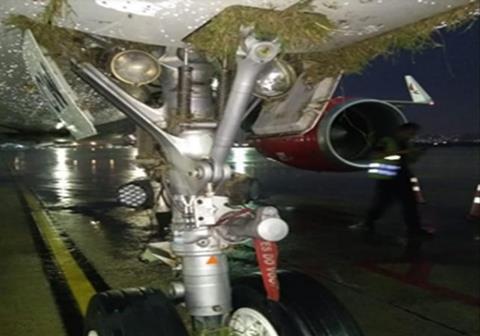 The crew did not report the off-runway incident to air traffic control because they felt there was “no standardised procedure”, says the inquiry, which meant control agencies and runway safety supervisors at the airport remained unaware.

Runway supervisors were alerted by airline mechanics who discovered the presence of grass in the landing-gear and fuselage underside, after which a runway inspection was carried out.

Avianca Brasil was under severe financial pressure at the time. The company had filed for bankruptcy protection a few months before the incident, and the investigators considered whether the climate of “apprehension and uncertainty” might have contributed to the situation.

CENIPA states that a diversion to an alternate airport would have generated expenses to cover passenger assistance.

“Although the [captain] did not recognise this situation as a decisive factor to proceed towards approach and landing, these factors may have had an influence on the decision-making process, even if not voluntarily,” it says.