Italian investigators have determined that an improper distribution of passengers on board an Alitalia Airbus A320 resulted in the aircraft’s suffering a tail-strike during an aborted take-off at Milan Malpensa.

The twinjet (EI-DTB), bound for Rome Fiumicino on 17 August 2017, had started to accelerate along runway 35R when, at just 42kt, it suddenly pitched up, causing its aft fuselage underside to scrape the ground surface.

Its crew aborted the take-off and returned to the parking apron.

Italian investigation authority ANSV says the aircraft was damaged by abrasion along a 1.8m by 0.3m area of its lower aft fuselage.

The A320 had been operating the last sector of a service from Rome to Hamburg, via Milan, and back on behalf of a cruise company.

ANSV says 171 passengers boarded at Hamburg of which 68 were destined for Milan and the other 103 for Rome.

Hamburg handling personnel assigned the Milan passengers to the first 12 rows of seats in the aircraft. The Rome passengers were seated behind row 12.

Baggage to be unloaded during the Milan stop was also placed in the forward cargo hold to speed the disembarkation. 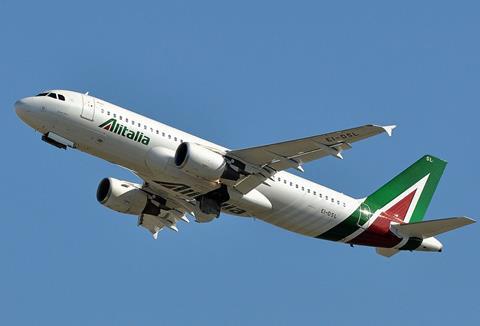 Disembarkation of passengers during the Milan stop left the A320 unbalanced

ANSV says Hamburg was outside of the airline’s network and, as a result, the aircraft’s load data was not automatically transferred to the aircraft. Handlers instead sent a paper load-distribution sheet, via email, to a controller in Rome.

The inquiry says the paper form was “not really designed for a multi-sector flight” and did not include space to indicate seating arrangements for the two different destinations.

Needing this information to produce a loadsheet, the controller entered a “reasonable” seating configuration – but one which was not validated – assuming that the distribution of passengers on board would be homogenous for both the Milan and Rome sectors.

For the Hamburg-Milan leg the loadsheet indicated 53 passengers in forward seating, 59 in central seating, and 59 in aft.

The non-validated data was not a problem for this sector, because the aircraft was heavily-loaded and almost all seats were occupied, resulting in a naturally even distribution.

But ANSV says the Rome controller “did not realise” that the data assumptions “would also have been considered valid” by handlers at Milan during production of the loadsheet for the Milan-Rome sector.

While the data indicated 33 forward, 39 central and 31 aft passengers, the actual loading arrangement – with all the Milan passengers in the forward rows – meant the distribution resulted in just four forward passengers, with 47 and 52 respectively seated in the central and aft sections.

“Such a distribution was not suitable for the purposes of correctly balancing the aircraft,” says the inquiry, adding that the situation was exacerbated by the removal of Milan-bound luggage from the forward cargo hold.

Investigators point out that carrier was not routinely operating multi-sector flights, and the “sporadic” nature of such operations resulted in unusual issues including the “insufficient” exchange of load information between handlers and the airline’s controllers.

ANSV adds that the crew failed to check visually the actual passenger distribution at Milan and notice discrepancies from the loadsheet.

It says Alitalia subsequently took corrective actions including emphasising to crews the importance of reinforcing safety defences and raising situational awareness while conducting services different from its normal operations. The carrier also introduced specific training for load controllers, as well as changes to loading forms including notes to verify actual seating allocations on multi-sector flights.