A320 veered off runway as late hydraulic failure 'surprised' pilots

Pilots of an Airbus A320 were caught out by a hydraulic failure as the aircraft landed at Burgas, their reaction leading the twinjet to veer off the runway and come to rest on rough ground.

Operating for Smartwings, the Greek-registered Orange2Fly aircraft had suffered a leak in its green hydraulic circuit during the flight.

The green circuit is linked to systems including landing-gear retraction and extension, nose-wheel steering and the left-hand engine thrust-reverser. 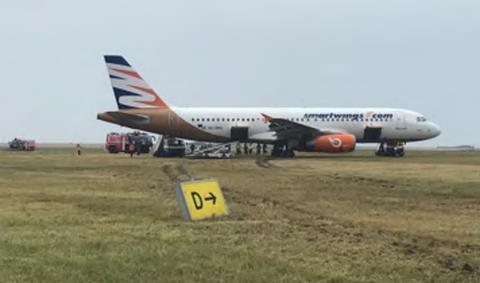 Although the A320’s landing-gear deployed normally, a ruptured hose in the right-hand main landing-gear actuator caused the “entire contents” of the green hydraulic fluid reservoir to be “sucked out and dumped into the atmosphere”, says Bulgaria’s air accident investigation unit.

The reservoir normally contains 14.5 litres of fluid but this dropped below 3.5 litres and triggered a ‘low reservoir level’ warning to the crew as the jet descended through 1,300ft on the approach to runway 04.

Because the green hydraulic circuit still had normal pressure at this point, a brief system check by the crew did not reveal the potential threat to the aircraft’s functions as the reservoir drained.

“The pilots decided to continue down on prescribed route…because the [electronic centralised aircraft monitor] warnings disappeared, and they decided that there was no more need to [take action],” says the inquiry.

Only when air started being drawn from the empty reservoir, at 740ft, was a warning emitted about the total loss of the green circuit, along with cautions about autobrake and normal braking – both systems which used the circuit.

The inquiry points out that the loss of the circuit occurred at a height below the point at which warnings from the ECAM are typically inhibited, by aircraft design, to prevent crew distraction at critical phases of flight.

It says the crew did not halt the approach to assess the situation or conduct follow-up activity, instead opting to proceed with the landing. The jet touched down just under 2min after the initial reservoir warning.

The A320 had already been dispatched from Brno with one of its left-hand main landing-gear braking systems inactive.

As the aircraft rolled out the crew were “surprised” by the subsequent malfunctions in other steering and braking capabilities, says the inquiry.

Braking action was good, despite recent rain, but the captain engaged both thrust-reversers, even though only the right-hand one was functioning as a result of the hydraulic failure.

The aircraft had been kept on the centreline through use of the rudder but it started to veer to the right, and attempts by the captain to use maximum rudder, asymmetric braking and nose-wheel steering failed to prevent it leaving the runway at 61kt, about 1,750m from the threshold. 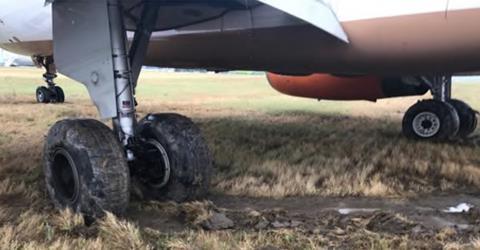 It came to rest 120m off the runway, having turned through some 110° to the right compared with the centreline heading. The aircraft passed over runway lights, a drainage cover, and hit a sign.

None of the 179 passengers and six crew on board was injured in the incident, which occurred on 18 July 2017. The aircraft involved (SX-ORG) sustained minor wheel and engine cowl damage from the lamp and sign collisions, along with mud and grass contamination.

The Bulgarian inquiry says the crew resource management – during a high-workload phase with warnings over multiple technical failures – led to a “wrong decision” to continue the approach, with no timely assessment of the situation.

Crew awareness of the faulty systems “seemed to come late” and was exacerbated by “incorrect” and “hasty” pilot actions after touchdown which, combined with reduced available braking and the loss of reverse-thrust and steering functions, resulted in the crew’s being unable to maintain the centreline.

Investigators found that linking the nose-wheel steering to the green hydraulic circuit in the airframe – the relatively early MSN1407, originally delivered in 2001 to BMI – rather than the yellow one on newer A320s, was a “dominant factor” in the excursion.