Airbus A350-1000 operators are set to be told to install updated flight-control and avionics software to reduce risk associated with oscillatory failure cases affecting the rudder.

The situation triggers control-surface oscillations which can then lead to excessive loads – particularly if resonance is present – on the aircraft’s structure.

Follow-up activity after the A350-1000’s type certification has discovered that loads for the oscillatory failure case of the rudder had “not been calculated properly”, says the European Union Aviation Safety Agency.

It states that this could potentially result in rudder oscillation and “unacceptable” high loads on the fuselage.

Airbus has developed new software for the type’s flight-control and guidance system, and EASA is ordering its installation on airframes which have not already undergone particular modifications.

EASA is proposing to order installation of two software updates on affected aircraft over a 14-month period, once a formal directive is issued. 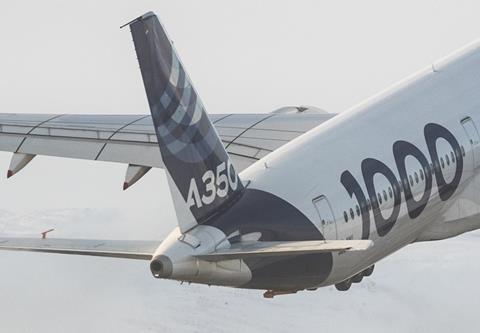