Airbus A350 crews are temporarily being given a revised procedure for altitude selection after occurrences of inadvertent height deviation, traced to incorrect manufacturing of the altitude selector dial.

It states that a failure of the altitude selector dial, located on the flight control unit, can change the target altitude by either 100ft or 1,000ft depending on the chosen interval setting on the ring behind the selector knob.

Although the erroneous altitude is shown on the instrument panel and the pilots’ primary flight display, EASA says it “may not get noticed by the crew”.

Investigations indicate that these events resulted from an “incorrect manufacturing process” on the altitude selector knob optical encoder, it adds. 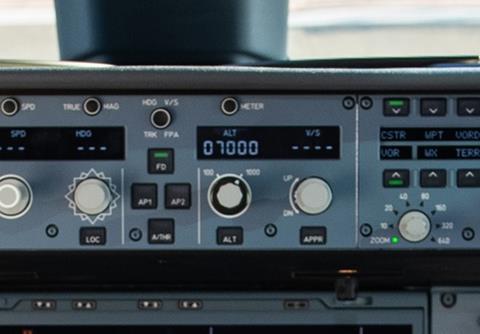 Altitude knob, and its ring interval selector, shown on the A350 instrument panel

Erroneous target altitudes could result in unexpected deviation of the A350’s vertical trajectory during climb, descent or a go-around.

Airbus has temporarily revised crew procedures in relation to use of the altitude selector, to limit the effect of uncommanded changes.