Airbus has carried out a transatlantic test flight with an A350-900 and A350-1000 in a bid to demonstrate the potential fuel savings achievable when aircraft operate in formation.

Performed on 9 November the Toulouse-Montreal flights involved the A350-900 operating as the lead, and the -1000 following, with a separation of 3km between the twinjets.

Pilots from Scandinavian carrier SAS and leisure airline French Bee, both A350 operators, travelled on the aircraft as observers. 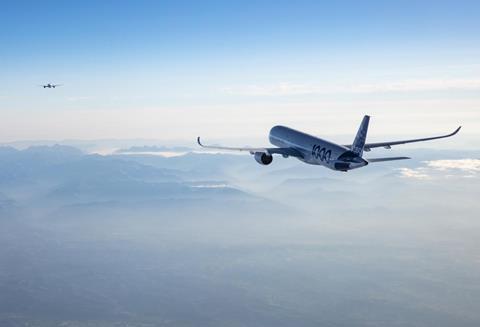 Flight-control systems enabled the -1000 to be positioned safely in the wake updraught of the lead -900. This meant it would be able to reduce thrust from its Rolls-Royce Trent XWB engines and save fuel-burn.

As a result the formation flight – which involved the first flight-test airframes of each variant, MSN1 and MSN59 – saved over 6t of carbon dioxide emissions during the crossing.

Airbus says this indicates potential for fuel savings of more than 5% on long-haul services.

“This demonstration flight is a concrete example of our commitment to making our decarbonisation roadmap a reality,” says chief technical officer Sabine Klauke.

“We have received a strong level of support for this project from our airline and air traffic partners, plus regulators. The opportunity to get this deployed for passenger aircraft around the middle of this decade is very promising.”

The test flight was a collaboration which involved French, UK, Irish and Canadian air navigation services as well as Eurocontrol, with support from the French civil aviation regulator.

Airbus says the retrieval of wake energy can be achieved “without compromising safety” and the next stage would be to secure further regulatory support in order to certify the operational concept.