Iranian investigators probing a Caspian Airlines Boeing MD-83 overrun at Mahshahr have determined the aircraft touched down nearly two-thirds of the way along the runway, after a highly-unstable approach and breaches of operating procedures – including omitting the landing checklist.

The aircraft, arriving from Tehran Mehrabad on 27 January, landed initially on its nose-wheel some 1,695m past the threshold of runway 13, with a descent rate of nearly 1,600ft/min and an airspeed of 171kt.

Its ability to decelerate after the long landing was hampered by a tailwind, a fast approach speed, and a relatively high weight owing to an uplift of additional fuel beyond that required for the flight. 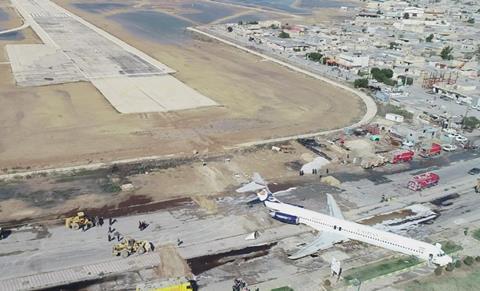 Flight IV6936 came to a halt on the Abadan-Mahshahr highway

All of the 136 passengers and eight crew survived, with only minor injuries, as the aircraft came to a halt, badly damaged, on the Abadan-Mahshahr highway located about 150m off the runway end.

Iran’s Civil Aviation Organisation states that the ex-navy captain, who was flying, had extensive experience with over 18,400h total time including 7,800 on type – a notable contrast to the far more junior first officer who had logged just 300h, less than half on the MD-80.

The first officer testified to the inquiry that, during the unstable approach, he wanted to execute a go-around but that the “age gap” between the pilots and the captain’s confidence in being able to handle the situation stopped him taking over.

Investigators found the flight was originally scheduled for a Boeing 737-400 but a hydraulic leak resulted in the MD-83 and its crew being pulled from an earlier service to Isfahan and reassigned to the Mahshahr flight.

Communication snags and a transport mix-up meant the crew did not have sufficient time to brief on the destination before departure.

Although the fuel required for the Tehran-Mahshahr service amounted to less than 5.9t, the captain requested a total fuel load of about 11t, without an explanation. The inquiry suggests this was a tankering decision.

The aircraft proceeded to its destination and its crew was told to expect the GODMO 1E arrival for runway 31, consistent with the prevailing wind.

But the captain requested the opposite-direction runway to “save time”, says the inquiry, and the flight was cleared for a GODMO 1F arrival and VOR/DME approach to runway 13.

The inquiry says that, given the tailwind and the extra fuel on board, this was a “poor decision”.

As the MD-83 descended through 2,500ft the autopilot was disengaged. The aircraft was travelling at 219kt, when its target approach airspeed was 135kt, and the captain chose to carry out manual ‘S-turn’ manoeuvres to lose altitude and decelerate, causing the aircraft’s heading to vary across a range of more than 20° either side of the approach axis.

Although the first officer mentioned carrying out the landing checklist, the captain dismissed the remark, telling him to “just leave it”.

With the MD-83 pitched nearly 12° nose-down, descent rates increased to more than 2,600ft/min. After passing 1,000ft the aircraft’s automatic systems issued nine ‘sink rate’ warnings and then three ‘pull up’ orders as the height reduced to 400ft. It then continued to give ‘sink rate’ alerts.

Investigators state that the aircraft took 38s to descend through the last 1,000ft. About 12s before landing, thrust was suddenly increased for 5s, reaching an engine pressure ratio of 1.46 on both powerplants.

Still travelling at 171kt, and with a descent rate estimated at 1,580ft/min, the MD-83 contacted the runway with its nose-gear first, far beyond the threshold. 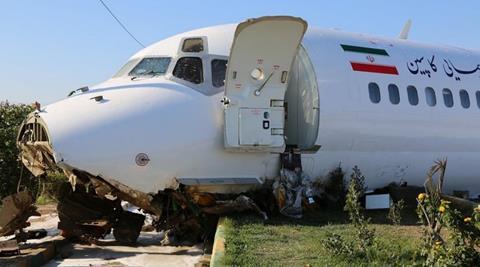 Calculations by the investigators determined that the normal landing distance should have been about 1,178m. The aircraft’s excess speed above the approach reference target extended this by 743m and the tailwind added 155m, with a further 76m necessary as a result of the 5t fuel surplus.

This put the minimum landing distance at more than 2,150m. But the aircraft’s long touchdown left the crew with just 1,000m of runway to bring the jet to a halt.

While full reverse-thrust and brakes were applied, the aircraft overran an unpaved area and crashed through the perimeter fence, passing a canal before entering the highway, colliding with the central reservation and a lamp post.

The driver of a bus stopped before reaching the wrecked aircraft, says the inquiry, blocking the highway to prevent further accidents.

It says the aircraft (EP-CPZ) was destroyed in the overrun, with its fuselage and wings substantially damaged and its landing-gear shorn off.

Iran’s CAO has attributed the accident to bad decision-making in requesting and accepting the runway 13 approach, and failing to execute a go-around as the descent destabilised. It also says the crew resource management was poor, and that the “inability” of the first officer to take control contributed to the situation.