One of Bek Air’s Fokker 100s crashed on take-off from Almaty on 27 December, resulting in the enforced suspension of the airline’s operation – a measure which the airline had argued was illegal.

But the Aviation Administration of Kazakhstan states that Bek Air has not only suffered two major incidents in the past three years, but experienced a “significantly higher than acceptable” level of serious safety problems over this period.

It adds that a detailed probe of the carrier was initiated after its suspension, during which “a number of violations” was uncovered.

Two of these have raised particular concern with the administration. It states that Bek Air has not conducted full and proper accounting of maintenance processes, particularly regarding the transfer of components between its aircraft.

This suggests there are uncertainties over the actual usage time of components compared with their recorded time in operation.

“It also indicates the inability of Bek Air to obtain spare parts, owing to lack of funding or the difficulty of acquiring spare parts for old aircraft,” says the administration. 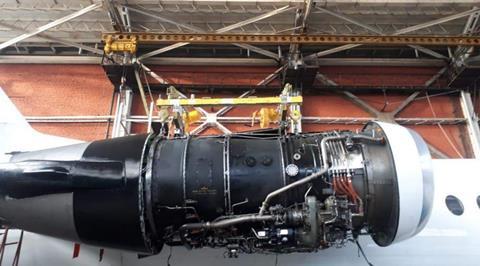 Cirium fleets data lists Bek Air as having nine Fokker 100s, powered by Rolls-Royce Tay engines, with the airframes dating between 1989 and 1995.

But the more serious finding, says the administration, centres on the removal of serial number data plates from aircraft engines.

“The identification of the engines cannot be verified, nor can their actual hours and cycles be verified,” it states.

“Several engines with such problems have been identified, casting doubt on the suitability of all of the aircraft engines operated by Bek Air.”

Rolls-Royce has confirmed there is no procedure for removing the data plates, the administration says, and the manufacturer has not received any information about overhaul of the carrier’s Tay engines since they were put into operation in Kazakhstan.

Bek Air’s flight operations have also raised concern. Icing remains a prime suspect in the Almaty accident and Fokker 100 procedures dictate that the wing surfaces must be specifically checked at three points for ice.

But the administration says studies of video evidence at the airport indicates that Bek Air crews generally did not carry out these wing checks.

It has identified shortcomings relating to documentation of training, and says there is no evidence of specific training for winter operations or icing risk management.

“Given the nature of aircraft operation in the Kazakhstan winter, this is a serious safety issue,” it adds.

Inspection of the carrier has also turned up other violations with life jackets, emergency locator transmitters, and a lack of fire protection in cargo compartments. “In general, the state of the fleet is unsatisfactory,” the administration says.

Bek Air will be instructed, within 10 days of the inspection work concluding, to submit a corrective action plan to eliminate all the problems. If it fails to resolve the problems within six months, its certification – which has been indefinitely suspended – will be completely revoked.