Such was the extent of damage to an Airbus A380’s engine after an uncontained failure over Greenland that its crew was forced to descend to a much lower cruising altitude than expected.

The Air France aircraft, en route to Los Angeles on 30 September 2017, suffered the failure of its outboard right-hand Engine Alliance GP7200 powerplant as the jet was climbing from 37,000ft to 38,000ft.

Air France procedures for engine failure in cruise require the crew to set power at maximum continuous thrust and to determine the maximum engine-out altitude, which is calculated by the flight-management system.

This maximum engine-out altitude enables the aircraft, at maximum continuous thrust, to maintain level flight at the long-range cruise speed – the Mach number at which the specific flight range is 99% of the maximum flight range.

Air France instructs its crews to descend to this altitude at M0.85, or 300kt, and proceed at the long-range cruise speed.

Airbus calculated that the long-range cruise speed of the aircraft, at the time of the failure, was just under 289kt – which would have given a maximum altitude of 34,000ft.

But French investigation authority BEA states that the calculation of engine-out altitude assumes the failed engine is windmilling and does not take into account possible deterioration of aerodynamic performance, notably the additional drag resulting from seized rotors or other uncontained failure damage.

The A380’s entire fan hub disintegrated during the incident, shearing off the engine inlet. 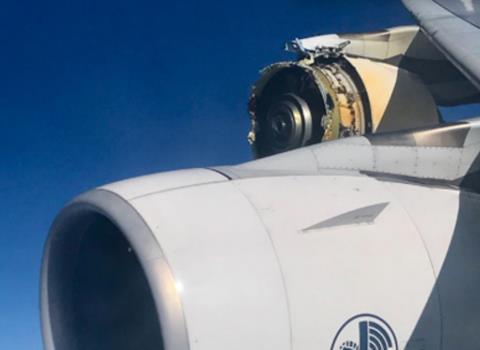 “Failure of [the engine] being uncontained, the crew were surprised by the amount of additional drag which degraded the aircraft’s performance,” says BEA.

The descent from 37,000ft was conducted with the intention of holding altitude at 270kt.

But BEA says this selected speed “could not be held” with the three remaining engines operating at maximum continuous thrust, adding that the pilots were “not able” to estimate the altitude the A380 would be able to maintain.

In order to avoid demanding excessive power from the engines, the captain opted to descend to 27,000ft at 279kt. It stabilised at this level – some 7,000ft below that expected – and subsequently proceeded at this altitude and speed for 45min.

BEA says the difference in stabilisation altitude was the result of increased drag from the damaged engine, adding that the engine-out procedure “does not refer” to possible degradation in aerodynamics in the event of severe failure.

“The step-down descent initiated by the crew was the only effective means available to determine the actual stabilisation level that the aircraft could maintain at constant targeted speed,” the inquiry states.

Operational documentation does not contain information which might allow the crew to estimate the performance consequences – on range, speed and ceiling – of severe engine damage, it adds, but acknowledges that, given the range of scenarios, compiling such data in a usable format is “not an easy task”.

The aircraft was outside of radar coverage at the time of the descent but its course meant no other traffic was in its vicinity, and the deeper driftdown did not pose any threat.

But BEA points out that any descent beyond that expected could be critical if obstacles or traffic are present on the route.

“It had been a concern for the crew who were surprised that they could not hold the theoretical driftdown indication calculated by the flight-management system and displayed in the cockpit,” it states.

BEA adds that the crew not only had to contend with the altitude uncertainty but also determine the optimum descent speed, taking the drag into consideration.

This was higher than the theoretical ‘green dot’ speed – offering the best lift-to-drag ratio – of 262kt, which is based on the performance data in the flight crew operating manual, but which does not account for drag.

Air France procedures instruct crews not to decelerate below ‘green dot’ speed after engine failure in cruise. “Without any possibility for the crew to evaluate the optimised descent speed, targeting ‘green dot’ was appropriate,” the inquiry says. 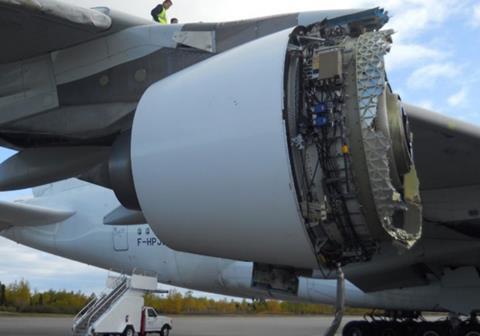 Originally bound for Los Angeles, the A380 diverted to Goose Bay in Canada