Air Arabia A320 overran on take-off after wrong-runway error

United Arab Emirates investigators have disclosed that an Air Arabia Airbus A320 lifted off beyond the end of a Sharjah runway, after the captain opted to continue a take-off despite the jet’s turning onto the wrong runway for departure.

The aircraft – bound for the Omani city of Salalah, with a trainee first officer flying – had been cleared to depart from runway 30 but, from the B14 intersection, the crew turned onto the opposite-direction runway 12 and accelerated into a rolling take-off.

Although the aircraft was travelling at just 63kt groundspeed, the captain – having realised the jet was heading in the wrong direction – believed there was insufficient runway distance to abort the take-off, and advanced the thrust levers to full power. Analysis by the General Civil Aviation Authority found there was 730m of runway available at the time.

Tower controllers contacted the crew, after noticing the A320 was rolling along the wrong runway, but there was no response.

The captain deployed additional flap and initiated rotation with aft sidestick input, although the first officer was simultaneously applying a nose-down input she had maintained since the beginning of the take-off roll.

Investigators state that the aircraft overran the far end of runway 12 by 30m, entering the runway safety area, before lifting off at 132kt. One of its main landing-gear tyres struck and damaged an approach lamp. 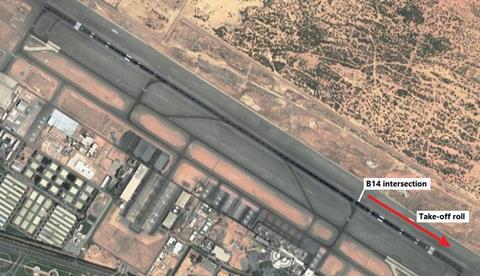 After turning right, instead of left, at the intersection the aircraft was lined up on runway 12

None of the 42 passengers and six crew members was injured during the 18 September 2018 event, and the flight proceeded safely to its destination.

The inquiry says the first officer had been under multi-pilot licence training, and had accumulated 160h on type. She had progressed sufficiently to assume the responsibilities of flying pilot, without the need for a cover pilot in the cockpit. The captain had over 15,500h on type from a total of more than 22,000h.

Airbus performance calculations and simulations found that the aircraft (A6-ANV) would have been able to stop safely on runway 12 if the captain had executed a rejected take-off.

According to the captain, he had been completing the ‘before take-off’ checklist and did not realise the aircraft had turned onto the wrong runway.

The inquiry says a “lack of external peripheral visual watch” by the pilots, as well as a failure to confirm the runway, led to the incident.

Even though the carrier had prevention barriers in place, such as positive runway identification, critical elements were “probably missed”, it adds.

Home-base habitual behaviour might have played a role – the first officer had carried out three prior departures from runway 12 – and the inquiry says the captain’s decision to carry out a single-engined taxi, when the taxi time was short, could have increased the crew’s workload.