Russian investigators have established that an Antonov An-24B which landed at Ust-Kut with a damaged wing had been attempting a non-precision approach in poor weather before sustaining a serious left-hand wing-strike.

The Angara Airlines aircraft (RA-47848) had been conducting a second approach to runway 30, following a go-around initiated by the crew because the first approach was unstable.

Federal air transport regulator Rosaviatsia says the airport was undergoing replacement of its instrument landing system and, as a result, the An-24 was carrying out a non-precision approach.

Weather conditions at the time – around 09:48 on 17 August – included significant cloud with a base of 70m, a crosswind component from the left gusting to 11kt, and reduced visibility owing to rain.

Rosaviatsia says the operating minima for An-24s performing such approaches at Ust-Kut are at least 110m vertically and 1,700m horizontally.

The first officer was flying the aircraft.

Rosaviatsia states that, during the second approach, the left wing collided with the ground at a distance of 710m from the threshold, and 17m from the right side of the runway. 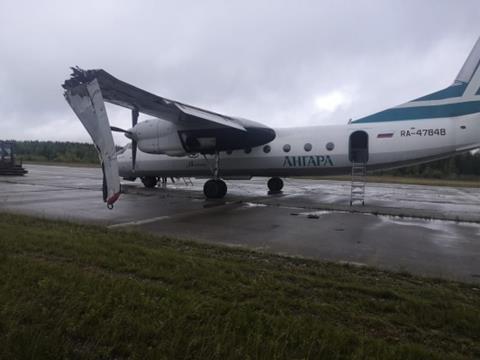 The aircraft touched down and crossed the runway, reaching the left-hand shoulder before returning to the paved surface. Its nose-gear collapsed during the accident as the aircraft rolled out.

None of the passengers and crew members was injured.

It states that an IrAero An-26 crashed at Ust-Kuyga in December 2002, after deliberately deviating to the right of the runway to avoid surface haze.

Despite the captain’s being warned repeatedly by air traffic control, as well as the other cockpit crew members, over the aircraft’s position, no go-around was conducted.

The captain instead opted to correct the course with an S-shaped manoeuvre involving a sharp bank to the left and a right turn at 40m height. The An-26 slowed, descended and its right wing hit the ground.

IrAero was also the operator of an An-24 which suffered a landing accident at Blagoveshchensk in August 2011, after it descended significantly below established minima during bad weather. The crew had underestimated the meteorological conditions, attempted to continue an approach in heavy rain, and failed to execute a go-around.