UK investigators have suggested that pilots may be losing currency with non-precision approaches, as they become less common, after probing an incident involving a Ukrainian Antonov An-26 at Birmingham.

The Vulkan Air aircraft (UR-CQD) had prepared for a localiser-DME approach to runway 33 as it arrived on 16 July last year.

But although its crew had been cleared to the platform altitude of 2,000ft, the aircraft was still at 2,500ft while 5.5nm from touchdown. It descended to 2,000ft but then maintained this level until just 3nm from the runway – which meant it was 660ft above the correct profile.

While the crew subsequently started descending, air traffic control instructed the pilots to conduct a go-around.

Controllers vectored the aircraft for a second approach from 10nm and reminded the crew that the glideslope to runway 33 was not available.

The UK Air Accidents Investigation Branch says the crew this time commenced the descent prematurely, dipping below the 2,000ft platform at 8nm – about 2.9nm before the correct descent point.

It reached 1,500ft at 6nm, putting it 500ft below the required altitude. Air traffic control issued a terrain warning and again ordered a go-around, repeating the instruction as the An-26 continued to descend to 1,400ft.

“The pilots responded that they had the runway in sight and were ‘approaching the glideslope’,” says the inquiry. “Air traffic control informed them there was no glideslope and again instructed the aircraft to go around, which the pilots then acknowledged.”

After carrying out the second go-around the crew accepted an offer for runway 15, which had an ILS approach available, and the An-26 subsequently landed without further incident. None of the nine occupants, six crew and three passengers, was injured. 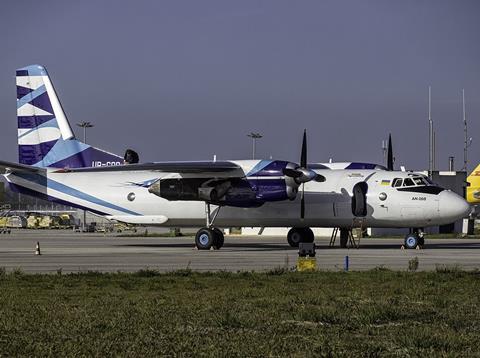 It also states that “apparently routine” height and distance checks from air traffic control might have given the impression that the aircraft was on the correct approach profile.

The newly-promoted captain might have been experiencing pressure because he was undergoing a line check by a senior manager – who had not intervened – and the aircraft’s instrument panel had recently been reconfigured.

“Based on the profile of the first approach it appears that the pilots had either misinterpreted the approach or had been mistakenly expecting to intercept a glideslope,” says the inquiry.

“On the second approach the crew appear to have misinterpreted the approach profile, commencing their descent too early, or had commenced an early visual approach without notifying air traffic control.”