One of US cargo operator Atlas Air’s Boeing 747-400Fs has sustained a treble engine pod-strike while landing at Shanghai in China.

Preliminary information from the US FAA states that the aircraft (N408MC) struck the ground with both left-hand engine pods, as well as the outboard right-hand pod.

The 22-year old aircraft is fitted with General Electric CF6 powerplants, according to Cirium fleets data.

According to the FAA the incident occurred at 02:05 on 5 August. The aircraft had been operating from Seoul and conducting an approach to runway 17R.

Meteorological data from Shanghai Pudong airport at the time indicates rain showers and winds from the south gusting up to 39kt.

The FAA has not detailed the extent of any damage to the aircraft, but says neither of the two pilots was injured.

Investigations of previous 747-400 pod-strikes indicate that, at typical landing pitch, there is a strike risk to the outboard and inboard engines at bank angles of 6-7°. The bank required increases to around 7.5° as the pitch reduces.

GE- and Pratt & Whitney-powered 747-400s have slightly more roll margin before a strike than those fitted with Rolls-Royce engines, according to Boeing’s flight training manual for the type. But the overall strike risk is affected by other factors including aerodynamic wing flexing and inertial loads. 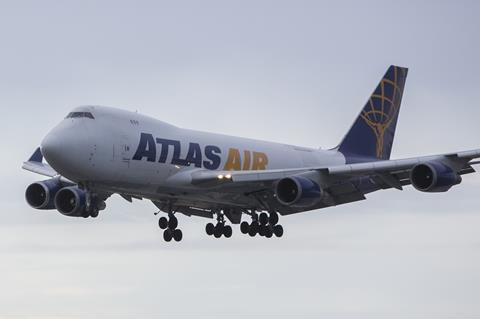