German investigators have determined that the crew of an ATR 72-200 freighter were distracted while turning for take-off from Cologne, and inadvertently lined up with the left-hand runway edge lights.

As the ATR accelerated along the runway it struck several of these lights, inflicting damage to the airframe in the vicinity of the nose-gear and main landing-gear as well as the propeller blades. The take-off was aborted.

The crew of the Swiftair aircraft (EC-INV) – departing for Sofia in darkness on 27 April last year – had been instructed to backtrack and line up on runway 06. This backtrack was unusual, the result of the normal taxiway being closed for construction.

With the captain controlling the nose-wheel steering, the ATR taxied along the runway to a turnpad at the end, initially following the yellow taxi guidance lines for the left-hand turn to line up.

But as the aircraft carried out this turn, a sound was heard in the cockpit, says German investigation authority BFU.

“The crew tried to identify the cause of the sound,” it states. “Initially, the crew assumed that the cockpit door had opened, but then determined that the [captain’s] bag had fallen down behind the seat.”

BFU says the pilots, the only occupants, would have momentarily turned their heads to look around the cockpit.

“This must have caused misperception and misinterpretation of the actual position of the aircraft and mistaking of the intermittent runway edge line on the turnpad with the centreline,” it says. 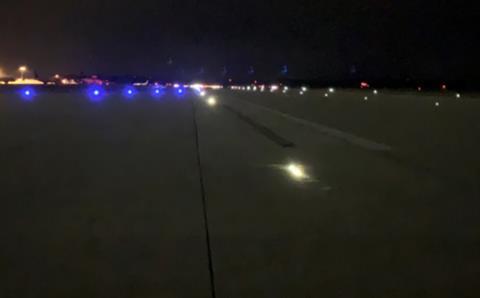 The pilot aligned the aircraft “consciously and precisely” with the white edge lights, says BFU, and the crew’s mental model of the ATR’s situation was not noticed or questioned.

After the ATR began to roll for take-off the crew noticed “several blows” to the aircraft and saw objects “flying off” but could not identify them, the inquiry states.

The crew brought the aircraft to a halt and subsequent inspection of the runway revealed nine edge lights had been damaged or destroyed along with a taxiway lamp.

Although visibility was good at the time, the inquiry believes that this might have “tempted” the pilots to pay less attention to following the turnpad’s taxi guidance and not question the aircraft’s position.

Swiftair’s operating manual contained several references to the importance of minimising distraction and knowing the location of the aircraft during taxi and take-off.

BFU acknowledges that, from the cockpit, differentiating between the edge and centreline lighting on the runway is “difficult”. It also notes that, owing to taxiway markings from the runway to the turnpad, the white runway-edge marking line shows “similarities” with the centreline marking.