Investigators have determined that a Royal Air Maroc Express ATR 72-600 twice struck the surface of the Mediterranean Sea during an extraordinary botched approach to Al Hoceima airport, badly damaging the turboprop before its crew diverted to Nador.

Analysis of the incident showed the pilots had proceeded with an unstable approach, after a lack of preparation, and descended below minimum altitudes without visual references.

But Moroccan investigation authority BEA also found the ground-proximity warning system had issued ‘terrain’ and ‘pull up’ alerts during the crew’s previous approach to the same airport.

As a result, prior to the accident, the pilots turned off the system, believing it had been giving nuisance alarms.

After the aircraft hit the water, the crew executed a belated go-around, telling the tower controllers that they were aborting the approach because of a bird-strike.

The ATR had been operating a four-sector ‘W-shaped’ pattern – flying Casablanca-Al Hoceima-Tangier then returning along the same route – on 9 July 2018.

On the first sector the crew conducted an area navigation approach to Al Hoceima’s runway 17. The captain, who was flying, could not see the runway upon arriving at the minimum descent altitude of 1,030ft and opted to continue below this height with a descent rate of 1,000ft/min.

While still nearly 1nm from the runway, the ATR descended to just 60ft – when it should have been closer to 300ft – and the ground-proximity warning system instructed the crew to ‘pull up’. The aircraft dipped to 45ft before climbing to 108ft, a height it maintained until the crew saw the runway and proceeded to land.

The aircraft (CN-COH) subsequently flew to Tangier and then embarked on the return leg to Al Hoceima, this time with the first officer as the flying pilot.

Opting for a VOR/DME approach, the captain informed the first officer that if the runway was not in sight at the minimum height of 760ft then they would descend to 400ft and maintain this height until the runway was visible – or otherwise go around at 2nm distance.

The first officer suggested, during this briefing, that the ground-proximity warning system should be turned off to avoid its being triggered again, and the captain agreed.

Investigators state that the captain de-activated the system at about 4,500ft during the descent to Al Hoceima’s runway 17, when the aircraft was around 11.5nm from the threshold. 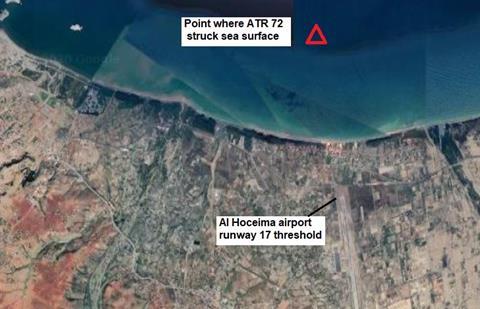 Investigators determined the ATR 72 hit the sea at about 1.4nm from the runway

The ATR, which was heading east over the sea, started to turn towards the south, and the crew received weather information showing mist and overcast cloud at 600ft.

As it descended through 2,260ft the captain selected an altitude of 400ft while 6.4nm from the runway and then engaged ‘vertical speed’ mode with a descent rate of 1,200ft/min.

Flaps were extended to 15° and the landing-gear deployed as the aircraft was cleared to land. The selected descent rate was increased to 1,800ft/min at about 1,200ft, and the crew selected an airspeed of 119kt to slow the aircraft from 155kt, then extended the flaps to 30°.

Owing to the rapid descent rate, the altitude capture mode engaged 400ft above the selected height.

At this point the first officer stated that the situation was “not normal”, and disengaged the autopilot at 80ft and an airspeed of 130kt. While he attempted to apply nose-up input, the captain simultaneously applied nose-down input – the two pilots opposing one another for 9s.

The first officer advanced the throttle levers but 2s later, at 1.4nm from the runway, the aircraft’s landing-gear contacted the surface of the Mediterranean Sea twice – at 3° nose-down pitch, with impacts of 3.2g and 3.9g – as a result of the captain’s inputs overcoming those of the first officer.

Investigators state that the captain subsequently eased off and the first officer was able to pitch the ATR into a climb. The landing-gear was retracted and the captain informed the tower controllers of the go-around, requesting a diversion to Nador and citing a bird-strike.

None of the 54 passengers and four crew members was injured but the aircraft suffered substantial damage during the water impact, with fuselage underside panels broken and stringers deformed. Sea water had also penetrated the fuselage through air inlets, leaving salt deposits on equipment between the panels and the aircraft floor, and the landing-gear needed replacing having been subjected to overload. 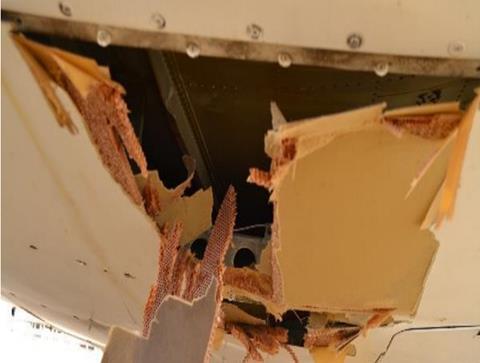 BEA says the accident resulted from “non-compliance” with operational procedures, exacerbated by the “deliberate shutdown” of the ground-proximity warning system. It points out that the alarms generated during the first approach to Al Hoceima were “justified” and “consistent” with the system’s logic.

Investigators have sharply criticised the crew’s performance, stating that the approach was characterised by a lack of preparation and deliberate deviation from standard procedures, while verbal communication essentially amounted to the captain’s giving orders without being challenged by the first officer.

Announcements were “non-existent” and cross-checks were “rare and ambiguous”, the inquiry says, adding that the crew continued the approach, breaching limits, despite the absence of the necessary conditions. Configuration of the ATR was carried out late, it says, and the aircraft was unstable on the approach, with an excessive descent rate and uncontrolled airspeed.

Without the ground-proximity warning system, the crew “deprived themselves” of any opportunity to take action earlier, the inquiry states.

But it credits the first officer – despite his lack of assertiveness resulting from the steep authority gradient – with limiting the damage to the aircraft, by reacting quickly, although late, when the severity of the situation became apparent.