BA A350-1000 struck tail during go-around after prolonged float

UK investigators have determined that a British Airways Airbus A350-1000 suffered a tail-strike during a go-around at London Heathrow when its first officer initially applied full nose-up pitch input after the twinjet briefly touched down.

The aircraft, inbound from Dubai on 2 January, had been arriving to runway 27L with the first officer flying the final stage of the ILS approach in gusting winds from the south-west.

After reducing thrust at about 50ft and flaring for touchdown, says the Air Accidents Investigation Branch, the first officer applied progressively more nose-up sidestick input as the jet descended through the final 10ft.

The aircraft floated about 5ft above the runway, and then started gaining height, before nose-up input reduced sharply and was then applied again as the aircraft descended.

This prolonged float meant the aircraft used up 900m of runway and was reaching the end of the touchdown zone. 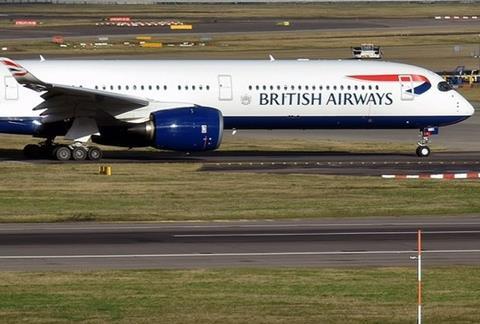 British Airways has a ‘safe landing’ policy requires pilots to execute a go-around if the aircraft is likely to land beyond the touchdown zone. This is regardless of runway length, to avoid ambiguity, and aligns with the carrier’s view that runway excursions are a greater hazard than missed approaches.

As a result – despite having 2,760m of runway remaining – the captain ordered a go-around.

But since the A350 was operating at idle power, the engines took several seconds to spool up to go-around thrust, and the aircraft’s low height and airspeed meant it briefly touched down instead of climbing away immediately.

The first officer, however, applied full nose-up pitch before partially reducing the input.

This led the aircraft – which has a fuselage length of 73.8m – to pitch nose-up at a rate of 3°/s, causing its tail to strike the ground as the pitch reached 9°. 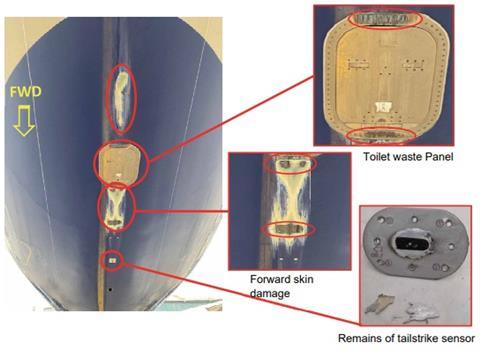 Various areas of the A350’s aft fuselage underside were damaged

Owing to an inspection of runway 27L for any debris from the tail-strike, the A350 conducted its second approach, this time with the captain flying, to runway 27R.

None of the 338 occupants was injured but the aircraft (G-XWBC) sustained skin damage in two areas of its aft lower fuselage, one of which penetrated the copper-mesh lightning protection and up to three layers of carbonfibre. The tail-strike sensor had fractured on impact, as designed, while a toilet waste panel was damaged beyond repair, and three vent pipes were found bent and abraded.