British Airways is to speed implementation of a fix to prevent a repeat of the nose-gear retraction incident that damaged one of the carrier’s Boeing 787-8s on the ground at London Heathrow, in the aftermath of two similar events in the previous five years.

UK investigators have yet to complete their assessment of the factors which led to the 18 June event, but have attributed it to a nose-gear locking pin being inserted in the wrong location before the landing-gear was cycled on the parked aircraft as part of a maintenance check.

The risk of such an error had been highlighted on other occasions.

One of Ethiopian Airlines’ 787-8s suffered an inadvertent nose-gear retraction at Addis Ababa in March 2016, as the aircraft was preparing for a flight.

Passengers were on board the aircraft at the time, according to the US FAA, and some received minor injuries, while the aircraft received “substantial” damage.

Lack of clarity surrounded the Ethiopian incident. Boeing acknowledged the retraction to the US FAA but believed the event was not caused by a wrongly-inserted lock pin, but was “specifically due to there being no ground lock pin installed at all” – which technically amounted to a different issue.

But the FAA, in a December 2019 directive, said it had received “conflicting information” over the probable cause of the incident, suggesting that it might have occurred as a result of wrong insertion. 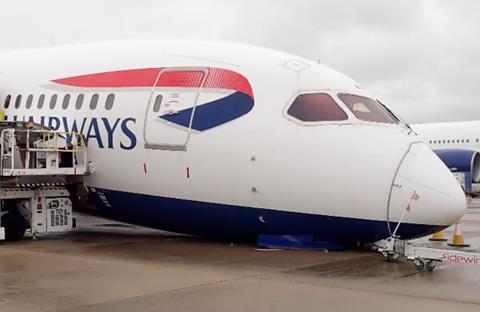 There was less doubt over a second occurrence, two years later in March 2018, when a 787-8 experienced an on-ground nose-gear retraction while undergoing maintenance testing at a US conversion facility in Grant County airport, Washington.

“Although no maintenance personnel were injured, the incident resulted in major structural damage to the forward fuselage,” the FAA stated.

It attributed the nose-gear retraction to the lock pin being fitted in the apex pin inner bore of the nose-gear’s lock link assembly – which was immediately adjacent to the correct location for the lock pin.

After the Grant County incident the FAA received a safety report from an operator’s maintenance technician which described the risk of accidental nose-gear retraction arising from misidentification of the lock pin’s insertion point.

United Airlines had pre-empted Boeing’s identification of the potential for such an error and devised its own solution to prevent it. The US carrier introduced a sealant to fill the apex pin inner bore completely and block any attempt to insert a nose-gear lock pin.

When the FAA put forward a proposed directive to mandate Boeing’s solution – an insert fixed with a cotter pin – the airline asked for its sealant-based mitigation to be accepted as an alternative, given that it had already modified its 787 fleet, and to delay adopt the Boeing fix until the next component overhaul.

But both Boeing and the FAA argued that sealant was “not a long-term solution” because it could degrade over the life of the landing-gear, whereas the bore insert was a “more robust” answer which could withstand the nose-gear’s rough environment.

While the FAA directive mandated the Boeing fix from mid-January 2020, it provided operators with a three-year compliance deadline.

British Airways had published a technical leaflet regarding nose-gear lock pin installation in April 2020, three months after the FAA directive, highlighting the correct and incorrect positions. This was re-issued the following December, with an expiry date of 9 June – nine days before the Heathrow event.

The aircraft involved, G-ZBJB, had not undergone the modification. It sustained substantial damage from the nose-gear retraction, not least because, as the jet sank, one of its forward left-hand passenger doors was almost completely torn off by mobile stairs positioned at the open exit.

British Airways plans to “expedite” implementation of the modification in the aftermath of the event, says the Air Accidents Investigation Branch.

The inquiry has yet to reach conclusions on the human factors which might have contributed, but state that the lead mechanic tasked with fitting the landing-gear lock pins was not tall enough to reach the nose-gear insertion point without the aid of steps. He pointed instead to the location of the insertion hole while a second mechanic fitted the pin.

But the investigators add that the lead mechanic fitted each main landing-gear assembly with two pins “with the aid of some portable steps”, while the other mechanic observed. The lead mechanic then confirmed to an engineer, both in the cockpit and over a headset, that the pins had been installed.