Canadian investigators are probing the baggage-loading condition of a Boeing 737 Max 8 after an incident involving premature pitch-up during take-off.

The Air Canada aircraft was departing Vancouver for Edmonton on 19 December.

It was accelerating for take-off when the nose “rose unexpectedly”, according to Transportation Safety Board of Canada.

“The [pilots were] able to hold it down and continued the take-off,” the authority adds.

Flight AC234 then proceeded to Edmonton and landed safely.

Subsequent inspection of the baggage hold found that 89 items of luggage had been placed in the aft hold, in contrast to the final loading documentation which showed them being in the forward hold.

“The company is conducting an investigation,” says the safety board.

It identifies the airframe involved as C-GEKX which, according to Cirium data, had only been delivered to the airline a month beforehand.

None of the 160 passengers and six crew members was injured. 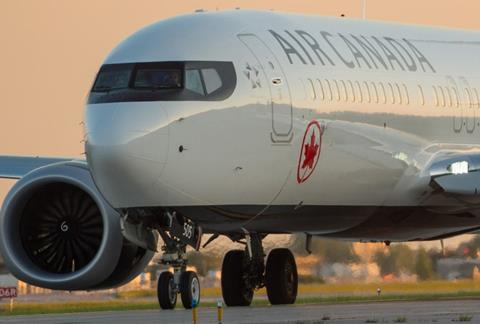