Transport Canada is tightening inspection requirements for the helicopter following an incident in which the collective stick on one aircraft failed during a pre-flight check.

Examination of that fractured stick, as well as another damaged example, has revealed fatigue cracking. 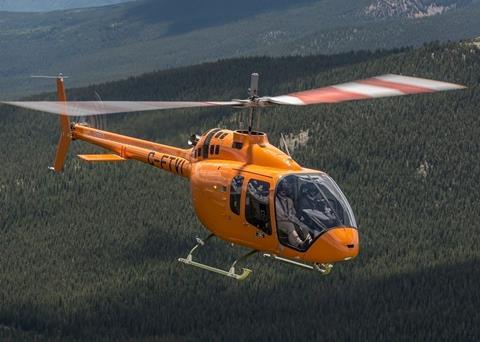 Bell has introduced temporary revisions to the flight manual prohibiting single-pilot operations from the right-hand seat, and Transport Canada has revised a previous airworthiness directive to reflect this ban.

Transport Canada adds that initial airworthiness instructions to carry out a one-time visual inspection are “not adequate” and a repetitive fluorescent penetrant inspection – capable of detecting smaller cracks – is required before the next flight and then every 25h.

The repetitive inspection covers helicopters not operated exclusively by a single pilot in the left-hand seat.

Findings from such inspections have shown that cracking of the collective stick can occur at “very low” flight hours, says the regulator.

It adds that the directive is an interim measure and it could mandate further corrective action to modify collective sticks on the 505.