UK investigators probing a serious dual engine problem on a departing Airbus A321 have discovered its fuel system had previously been overdosed with biocide, after a maintenance engineer misunderstood a measurement term.

The engineer was confused by the term ‘ppm’ – meaning ‘parts per million’ – while conducting a biocidal shock treatment of the Titan Airways A321’s fuel tanks, as the jet neared the end of a month-long maintenance check.

While the anti-contamination treatment required a biocide concentration of 100ppm, no explanation or instruction for calculating the overall quantity featured in the aircraft maintenance manual task, and the engineer resorted to an internet calculator.

But he miscalculated the dose and, instead of the correct quantity of just under 0.8kg, he poured 30kg of biocide into each of the right- and left-hand wing tanks – equivalent to more than 37 times the maximum permitted dosage, given that the tanks both held 6,200kg of fuel.

“The task had not been designated as a critical task, and therefore no additional measures were used to check that it was performed in accordance with the [manual],” says the UK Air Accidents Investigation Branch.

“No control measures were in place at the [maintenance organisation’s] stores or planning departments to prevent unusually large quantities of chemicals being issued to [engineering] staff.”

It adds that the pouring of the biocide directly into the tanks was not an approved process, and it should have been pre-mixed with fuel.

While the inquiry suspects the excessive level of Kathon FP 1.5 biocide is connected to the subsequent engine problems, it is still working to understand the impact of the errors.

The A321 experienced a number of engine start-up and performance difficulties while conducting flights on 26 February, two days after the aircraft returned to operations post-maintenance. 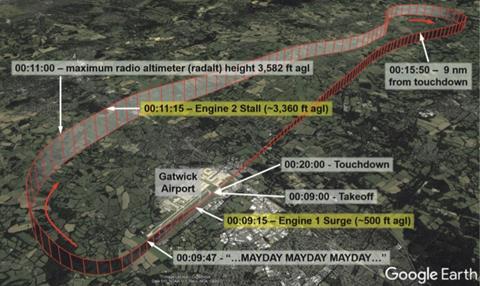 But the most serious of these occurred as it took off from London Gatwick on a crew-only ferry to London Stansted. The aircraft’s left-hand CFM International CFM56 powerplant began “banging and surging” at 500ft, says the inquiry, the engine’s N1 dropped to less than 40% for 25s, and the jet started to fishtail.

As the crew declared an emergency and requested a return to Gatwick, instruments indicated an intermittent stall of the right-hand engine. The crew reduce the thrust and flew high on the approach, preparing for a possible glide if the engine situation deteriorated. The A321 touched down safely about 11min after departure, with no injuries to the seven occupants.

Use of the Kathon FP 1.5 biocide for aviation fuel was suspended by the product’s manufacturer on 10 March.

The inquiry is also looking into another maintenance error that occurred before the Gatwick departure incident, after the A321 arrived from Krakow.

Owing to the engine difficulties recorded during the inbound flight, an engineer for a line maintenance provider at Gatwick was instructed to examine the right-hand engine.

But the engineer did not filter the troubleshooting manual for the specific aircraft (G-POWN) and, instead of using a procedure for a CFM56 powerplant, applied one for the CFM Leap-1A which is fitted to the A320neo family.

“The reasons why the Gatwick engineer selected the troubleshooting procedure for the Leap engine, and any impact of this on the sequence of events in the subsequent serious incident, will be investigated further,” says the inquiry.

In the interim, it says, both the Gatwick maintenance organisation and the maintenance firm which carried out the biocide treatment have taken steps intended to reduce the risk of error recurrence. UK investigators are being assisted in the probe by US, French and Cypriot authorities.