Investigators have found that a Cessna C208B operating a cargo flight conducted an unstable approach before landing long and hard, and suffering a runway excursion in the British Virgin Islands.

The single-engined aircraft, with the US registration N967FE, was operating on behalf of FedEx and arriving from Puerto Rico on 23 September last year.

Its pilot appeared to be experiencing high workload, giving an incorrect position and intention report to air traffic control, which the UK Air Accidents Investigation Branch attributes to his prioritising flying the aircraft in “challenging” weather conditions.

Although the weather situation, which included showers over the airport, initially convinced the pilot to return to Puerto Rico, he changed his mind after seeing the opportunity for a visual approach to runway 25 at Tortola’s Lettsome airport.

He commenced the approach from overhead the airfield at 5,000ft, but the aircraft remained above the normal approach profile with a high speed and high rate of descent. 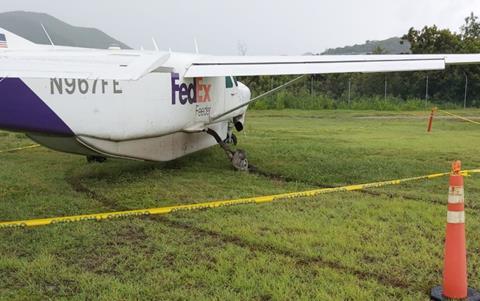 After overflying two-thirds of the runway, the C208B landed hard and veered onto grass

“The aircraft did not meet the stable approach criteria specified by the operator,” says the inquiry, pointing out that the C208 was still travelling at more than 150kt just 30s before touchdown. “It is likely that the high-energy approach would further increase the pilot’s workload.”

Having descended at 1,400ft/min, the aircraft briefly levelled at 250ft and decelerated to 95kt as its engine power reduced.

The pilot told the inquiry that he had lost visual contact with the runway after entering a heavy shower, and had opted to execute a go-around, but said the aircraft did not climb after he applied full power – adding that he sensed “strong windshear” and could not stop the aircraft descending.

But analysis of the approach showed no evidence of short-term changes in airspeed that might indicated the presence of windshear.

The inquiry could not rule out a potential temporary problem with the fuel-control unit – although an examination could not find any anomalies – but it points out that the pilot did not use the aircraft’s emergency power lever, which could have bypassed a malfunction and restored engine power.

“If the engine did not respond it is likely that any increase in workload caused by the weather conditions and the high-energy approach would have reduced the pilot’s capacity to diagnose the problem and respond appropriately,” it says.

Even before the aircraft levelled, it was past the point where a safe landing would have been difficult. The inquiry says it overflew two-thirds of the 1,206m runway at about 200ft before suddenly descending and landing hard 795m beyond the threshold.

The right-hand tyre burst and the baggage pod fitted beneath the fuselage struck the runway surface. As the aircraft decelerated the pilot was unable to keep it on the centreline and it veered to the right, travelling onto grass and coming to a halt 18m to the north of the runway. The pilot, the only occupant, was not injured.

No flight-data or cockpit-voice recorder was fitted to the aircraft, although the operator – listed by Cirium as Mountain Air Cargo – had been installing recorders on its fleet at the time of the incident.

Investigators add that the operator intends to update operating manuals to state explicitly the altitude by which stable approach criteria must be achieved.