Investigators believe a Canadian carrier’s operational culture, which prioritised mission completion over regulatory compliance, contributed to breaches of safety procedures and the crash of a modified Douglas DC-3 during an attempt to land at Sachigo Lake airport in Ontario.

The inquiry highlights, in particular, the decision by the North Star Air crew to conduct the cargo service from Red Lake airport under visual flight rules despite the instrument meteorological conditions.

This decision, says Transportation Safety Board of Canada, was influenced by a “distorted perception of risk” which arose from “successful past experience in similar situations”.

Some pilots at the carrier had developed “casual attitudes” towards regulatory compliance that resulted in “routine adaptations”, including operating visual flights under instrument conditions, which “eroded safety margins”.

The inquiry attributes such breaches to limitations for instrument flights, including lack of alternate airports, the lower fuel requirements for a visual flight – allowing higher payload – and reduced flight time.

This placed pilots at “significant risk” given the reduced options for diversion and the increased potential for accidents in low visibility.

Pre-flight weather information indicated low ceiling and reduced visibility due to light snow before the DC-3 – modernised as a Basler TP67 variant with turboprop engines – departed for Sachigo Lake on 3 December 2019.

The captain did not file a flightplan or itinerary beforehand, contrary to regulations and the company’s operating procedures.

Visual flight rules in the prevailing conditions would leave “very little safety margin”, says the inquiry, adding that an extra 233lb (105kg) of fuel would have made a suitable alternative airport available. 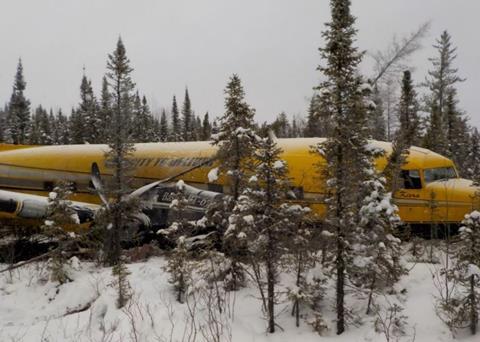 “Because of the captain’s history of operating under [visual rules], consideration was not given to determining what [instrument] options existed prior to departing [Red Lake],” it adds.

Shortly after take-off the aircraft entered, and climbed above, cloud layers – in breach of visual flight rules – before reaching its 5,500ft cruising altitude, and descended through cloud again on approach to Sachigo Lake.

Believing weather conditions would improve at the destination, the crew elected to conduct a visual approach to runway 10 and entered the corresponding area navigation pattern into a GPS system for additional guidance.

As the aircraft descending through the cloud the captain activated ice-protection systems, having observed rime ice accumulating on the wings. The DC-3 levelled at 350ft above ground, some 3nm from the airport, then continued to descend to 200ft and turned to prepare to join the right base leg.

But when the aircraft broke out of the 350-500ft cloud base, the captain realised it was not placed to continue the planned visual approach, and he entered a wide left-hand orbit at low level – just 100-350ft above ground – in an effort to reposition.

Horizontal visibility was reduced by snow and mist, and the first officer was unaware of the captain’s intentions because he had not been briefed.

After completing the wide orbit, the aircraft was 1.25nm south-west of the airport and 0.5nm south of the planned final approach track, but still out of position. The captain flew parallel to, and just south, of runway 10, passing over the terminal at about 200ft before turning left for a downwind leg.

On this leg the DC-3’s height varied from 150-225ft and it passed within 0.12nm of a 150ft tower between the aircraft and the runway, before entering a descending left turn to intercept the final approach path.

Analysis of flight data indicates the aircraft struck trees, damaging its pitot-static tubes which hang far below the nose, and 10s after starting the turn it collided with terrain about 650ft south-west of the threshold. The DC-3 hit the ground wings-level and slid for 350ft before coming to rest. 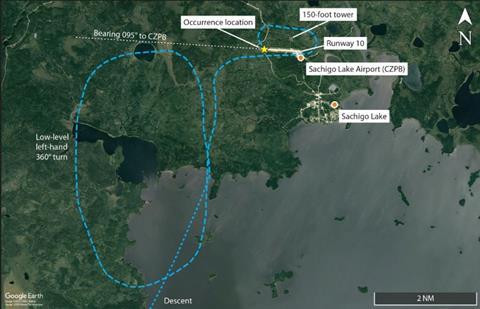 Neither pilot was injured although neither had been wearing shoulder harnesses. The aircraft (C-FKAL), however, sustained substantial damage.

Investigators believe the captain experienced “attentional narrowing” during the high-workload and low-altitude approach, leading to an undetected and inadvertent controlled descent into terrain.

No flight-data recorder was fitted to the aircraft, and although it was normally equipped with a cockpit-voice recorder, a paperwork error led the recorder to be placed in inventory – rather than re-installed on the DC-3 – following a repair. The recorder had been missing from the aircraft for 329 days since its removal, far beyond the time defined in the minimum equipment list, and was not fitted at the time of the accident.

Transportation Safety Board of Canada says the “result-oriented” subculture at North Star Air contributed to the crash.

It adds that the company’s safety-management system did not identify underlying factors which led to instances of instrument flights being conducted under visual rules, and did not take additional measures to ensure its DC-3 operations were carried out in accordance with regulations.

“As a result, previously identified unsafe practices persisted, and played a direct role in this occurrence,” it states.

North Star Air subsequently implemented a quality-assurance programme for flight operations and, about a year after the accident, civil aviation regulator Transport Canada inspected the carrier to evaluate its corrective action plan.

Transport Canada concluded that the long-term actions undertaken by the operator were “effective”, the inquiry says.