Pilots of a Bombardier Challenger 601 disagreed over their recollections of a go-around call after a ground-proximity warning sounded during an unstable approach to Oxford airport.

The crew had been given a shortened approach by air traffic control as the executive jet arrived from Guernsey on 22 March.

After levelling at 1,800ft just before the final approach fix to runway 01, the aircraft (2-PAPA) entered a high rate of descent in instrument conditions.

No information was recovered from the flight-data recorder.

But the UK Air Accidents Investigation Branch says the first officer recalled seeing a descent rate of 2,200-2,500ft/min on the instrument panel.

Both pilots heard a ground-proximity warning, says the inquiry, but the pilots’ recollection of subsequent events “differed”.

The captain recalled hearing a ‘terrain’ alert system, but – in contrast to the first officer – not a ‘pull up’ instruction.

Operator procedures required the crew to initiate a maximum-gradient climb after a ground-proximity warning in instrument conditions, and a go-around following an unstable approach.

“Neither occurred,” says the inquiry. 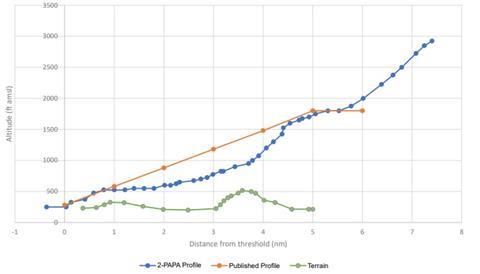 Approach of 2-PAPA compared with the published profile

According to the captain the aircraft broke out of cloud at 900-1,000ft and, having seen the runway, believed the aircraft was 300ft below its correct approach profile.

The captain opted to continue the approach, recalling that both the first officer and air traffic control had cautioned over the aircraft’s low altitude.

But the first officer testified that he had called for a go-around immediately after the ground-proximity warning, and that he did not receive a reply from the captain.

He called for a go-around again, but claimed the captain “did not physically or verbally acknowledge” the call.

The first officer recollected that the aircraft broke out of cloud at 700ft and – as the captain reduced the descent rate – made another attempt to call for a go-around, claiming the captain replied: “Why would I go around when I am visual with the runway?”

According to the first officer, he responded that the aircraft was 200ft above the ground with four red lamps from the precision-approach indicator – signalling that the jet was below the normal approach path.

The aircraft touched down with no resultant damage and no injuries to the three crew members or two passengers.

Investigators have been unable to determine the reason why the aircraft commenced a high rate of descent, but suggest that the time taken by the flight-management system to calculate a new profile left the aircraft above it, and the autopilot commanded the descent to intercept.

The inquiry has not ruled out an “anomaly” in the flight-management system.

But it points out that the shortened approach left the crew insufficient time to brief for the approach, and the pilots had not agreed how they intended to fly it. The investigation also suggests fatigue might have played a role, given that the aircraft had flown from the Bahamas to Bristol the day before, and then from Bristol to Guernsey, where the crew had to endure a 4h wait before heading to Oxford.