Canadian authorities are reviewing the safety case for the Bombardier Challenger 600 business jet, after an uncommanded flap-extension incident highlighted a potential increase in the risk of a serious accident.

The incident involved a Challenger 604 (D-AAAY) which experienced the uncommanded deployment on 10 August as it climbed through 19,000ft after departing the UK’s Farnborough airport.

It was travelling at 296kt as the flaps extended to 20° – some 65kt above the maximum speed limit for the configuration – and, as the aircraft decelerated to 234kt, the flaps continued to extend to 45°, for which the speed limit was 189kt.

The crew managed to return to Farnborough and the aircraft landed safely. 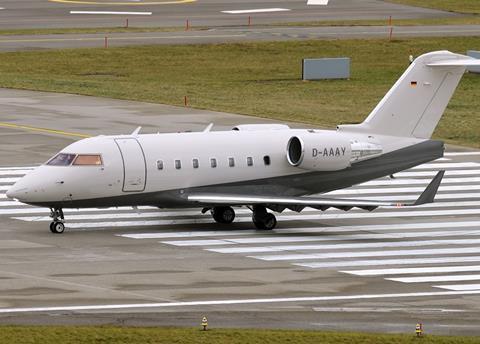 Analysis of the flight-data recorder, which contained the jet’s last 64 flights, showed evidence that the flaps had been retracting slowly, half the normal speed, on each of them.

The UK Air Accidents Investigation Branch points out that two motors normally drive the flaps. If one motor fails then the other will drive the flaps, but only at half speed.

Investigators have yet to determine the reason for the uncommanded flap extension.

But the inquiry states that the flap system should have protected against uncommanded movement, limiting it to 3° beyond the commanded flap position.

This protection system halts flap movement by removing power from the flap drive motors, via supply of electrical power to extension and retraction relays.

But inspection of the aircraft found a fault in one of the retraction relays, and this fault meant one of the drive motors continued to operate.

“Failure of the [retraction] relay meant that the uncommanded movement protection system was disabled and only an uncommanded extend signal was required to extend the flaps,” says the inquiry.

“The safety case for an uncommanded flap movement was calculated assuming two concurrent failures, but this event shows that it is possible for one failure to exist undetected for some time.”

As a result, it states, there is potentially an increased risk of a serious accident occurring.

Bombardier and Transport Canada is reviewing the safety case for the aircraft, to ensure that the probability of uncommanded flap risk has been correctly calculated.

“On this occasion the crew, who were actively monitoring the aircraft during climb, quickly noticed the uncommanded flap extension and were able to respond appropriately to control the aircraft and reduce its speed to below the flap limit speed,” says the inquiry.

But it stresses that the aircraft remain in a flap overspeed condition – with limits exceeded by more than 100kt at times – for nearly 3min.

“Had the aircraft been in the cruise, the crew may not have been able to recognise the uncommanded flap extension so promptly and take corrective action within the time required for the flaps to fully extend,” it states.

Bombardier is advising Challenger 600 series operators of the circumstances of the incident, and associated maintenance tasks, while Transport Canada will mandate any action necessary to ensure continued safe operation.