Cirrus warned not to overshoot turn before Colorado collision

Investigators probing the mid-air collision involving a Fairchild Metroliner and a Cirrus SR22 over Colorado are trying to establish why the Cirrus apparently overshot its final approach path after each aircraft was cleared to land on separate – but closely-spaced – parallel runways.

Separate tower controllers at Centennial airport appear to have been managing the approach patterns to runways 17R and 17L, which are spaced just 700ft apart, before the 12 May accident.

Air-ground communications show the Key Lime Air Metroliner, arriving from Salida, had been inbound to 17L while several light aircraft, including the Cirrus, were in the pattern for 17R.

Approach control had cleared the Metroliner for a visual approach before instructing it to contact Centennial tower. At this point it was about 4nm from touchdown according to a tower advisory to a waiting aircraft, putting it in the vicinity of the Cherry Creek reservoir directly north of the airport.

The Cirrus pilot, approaching from the west, had been told to fly towards the west shore of the reservoir and follow a Cessna which had just turned onto right base.

After confirming the traffic in sight, the Cirrus was told to follow it to runway 17R, and given landing clearance. It was also informed about the Metroliner inbound to 17L.

“Additional traffic, north shore, is a Metroliner for the parallel,” the controller stated, to which the Cirrus pilot replied: “Have traffic in sight, cleared to land 17R.”

The tower controller overseeing the Metroliner also issued a traffic advisory, telling the pilot there was a “Cessna on final for the parallel runway” at the one o’clock position, one mile distant.

Investigators have yet to confirm whether this was the Cessna that the Cirrus had been told to follow, or a different aircraft. The air-ground exchanges with the Metroliner, archived by LiveATC, do not appear to contain a specific reference to the Cirrus itself.

Shortly afterwards the Metroliner was cleared to land on runway 17L but, over the subsequent 30s, the Cirrus appears to have strayed into its path from the right while turning for the final to 17R.

“Do not overshoot the final,” the controller warned the Cirrus pilot, apparently in vain as the light aircraft collided with the Metroliner. 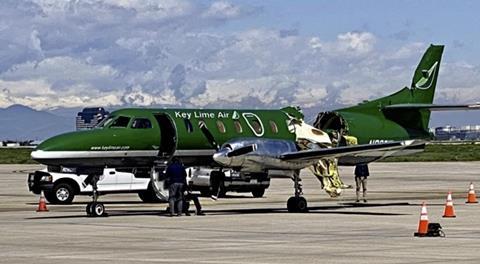 The Metroliner remained airborne, despite a badly damaged aft upper fuselage, and its pilot appears to have been unaware of the nature of the event as he declared an emergency.

“Looks like the right engine failed, so I’m going to continue my landing here,” he told the controller, who cleared the aircraft to proceed to 17L, where it landed.

Other aircraft advised the tower controllers that a mid-air collision had occurred and the Cirrus had deployed its safety parachute.

None of those on board the Cirrus or the Metroliner was injured.

The National Transportation Safety Board has yet to detail the circumstances of the accident and the status of any collision-avoidance systems fitted to either aircraft. Both were operating under Part 91 general aviation rules.

Investigators have listened to air-ground communications and interviewed both pilots. “It’s so fortunate that no-one was injured,” says investigator in charge John Brannen.