Cliff collision An-26 crew did not request descent below 600m: inquiry

Pilots of the Antonov An-26 which crashed into a cliff on approach to Palana had informed air traffic control that they were descending to 600m (1,970ft) shortly before the collision.

But the crew did not mention reaching or levelling at this height, nor did they request any further descent clearance before the accident.

Russian investigators have disclosed preliminary findings from the flight-data recorder and air-ground communications examined after the 6 July crash involving a Kamchatka Aviation Enterprise flight from Petropavlovsk-Kamchatsky.

Weather conditions at Palana had delayed the departure by almost 2h before the aircraft took off at 12:57.

The analysis shows that, after passing the MANUB waypoint about 40km south-south-west of Palana, the crew originally intended to follow an NDB approach to Palana’s runway 29 and then conduct a visual landing.

But investigators state that, after the NDB approach had been flown, air traffic control permitted the crew to enter a circle-to-land pattern and to report reaching a height of 800m based on the QFE reference for airport elevation. Palana airport’s elevation is around 260m above sea level.

As it entered the pattern, the aircraft deviated to the north of the airport by more than 5km (2.7nm) and started a series of left turns to align with an approach from the west.

Air traffic control told the crew that the aircraft was heading north-east on a bearing of 340° as it reached 800m. The crew informed that they would proceed with descending to 600m.

But the inquiry says: “The crew did not report [reaching or maintaining] an altitude of 600m [and] did not request further descent.” 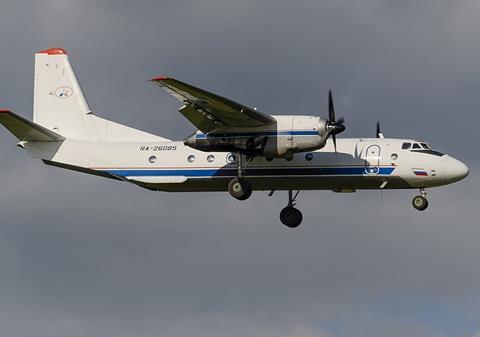 The aircraft carried out a “combined” turn to base leg and final approach, about 12km from the NDB. About 1min before the crash a final radio exchange took place during which the crew were notified of their heading of 320°, and the pilots informed that the distance was 9km.

Investigators state that the aircraft continued turning left until it was flying south-east on a heading of about 140°, a heading it maintained until it collided with a cliff on the coastline.

It struck the cliff, located 3.8km north-west of the airport, at about 184kt. Neither the flaps nor the landing-gear had been deployed, according to flight-data recorder information.

The impact and a subsequent fire destroyed the aircraft and none of the 28 occupants survived. The aircraft had also been transporting 870kg of luggage, cargo and mail.

Recovery personnel retrieved the tape drive mechanism from the flight-data recorder, which was transferred to the Interstate Aviation Committee for analysis. The aircraft was also fitted with a tape-based cockpit-voice recorder.

Meteorological conditions for Palana, says the inquiry, showed winds from the south-west at 14kt – which would have generated a crosswind from the right for the aircraft’s inbound heading – with good visibility but fog in the vicinity of the airport. Cloud was overcast at 720m and present down to a base of 300m, and the airport pressure was 1,009mb.