French investigators have emphasised the risk of confirmation bias following an incident in which a Cessna 525 executive jet suffered a simultaneous failure of an air-data system and the left-side primary flight display.

Immediately after take-off from Paris Le Bourget on 14 August 2020 the left-hand primary display blanked, prompting the pilot to switch its information to the central display.

But seconds later the autopilot disengaged, visual and aural warnings activated, and the altitude on the central display increased from 800ft to 2,900ft.

Comparison of the altitude and airspeed information on this screen and the right-hand primary display suggested that the data was not reliable, and the pilot opted to declare an emergency and return to the airport.

French investigation authority BEA says the cause of the left-hand display failure could not be determined, but the static ports which fed the left-hand air-data system were subsequently found to have a large insect and sand inside.

This meant that the central display was showing inaccurate information to the pilot and, since the transponder was being fed from the same air-data computer, it was transmitting erroneous altitude information to air traffic control.

While communicating with a Paris Charles de Gaulle air traffic controller, seeking an ILS approach to Le Bourget, the pilot mentioned his altitude was around 5,000ft based on the right-hand primary display.

But the controller replied that, according to radar information, the aircraft was at 2,600ft – consistent with the altitude shown on the cockpit’s central display.

This led the pilot to believe that the right-hand display was faulty and the central display was accurate, when the opposite was the case.

BEA says the pilot informed the controller that he would rely on the central display and “ignore” the information on the right-hand display, and the controller responded that this was the correct interpretation based on her radar data.

“This erroneous information was used by the pilot and the controller and resulted in a confirmation bias regarding the aircraft’s altitude” says the inquiry.

“This bias could have significantly increased the risk of collision with the terrain.” 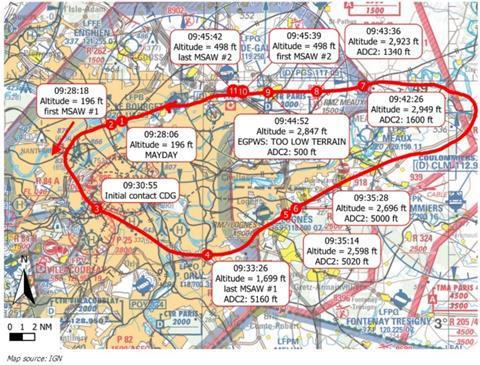 The controller asked the pilot to level at 3,000ft and carry out the approach to Le Bourget’s runway 27 from this altitude.

She subsequently instructed the pilot to descend several times. But BEA states that, while her altitude information incorrectly indicated the aircraft was stable at 3,000ft, it was actually descending from 5,000ft to 1,600ft.

The pilot continued to believe that the central display, rather than the right-hand display, was correct based on the controller’s radar altitude information.

But when the pilot received a ground-proximity warning, he advised the controller that the aircraft was low and he still did not have Le Bourget in sight, and switched the transponder to the other air-data computer.

This immediately resulted in the controller’s radar screen showing the aircraft’s altitude as 500ft, triggering a minimum safe altitude warning.

“At this moment, the controllers in the Paris Charles de Gaulle south tower saw the aircraft and estimated that its height was lower than that of the tower,” says the inquiry.

But the pilot subsequently stated that he could see Le Bourget’s runway, and its precision-approach indicator lamps, and proceeded to conduct a visual landing. The aircraft (N222NF) landed safely, 21min after take-off.

Neither the pilot nor the three passengers was injured.

BEA says the pilot testified that he “did not have time” to understand the altimeter fault, and did not look at the standby instruments. It states that he was flying a high-performance aircraft alone, in restrictive weather conditions, with a workload increased by an overspeed alarm and other warnings.