Investigators have suggested that familiarity with routine, combined with expectation bias, led the crew of an Embraer 190 to miss clues that the jet’s aileron cables had been cross-rigged during maintenance.

The Air Astana aircraft had emerged from maintenance at Portuguese firm OGMA during which the aileron cables were inadvertently reconnected the wrong way around, effectively reversing the roll control.

After the aircraft departed from Alverca do Ribatejo air base on 11 November 2018, to be ferried back to Almaty, the pilots experienced severe control problems – at one point considering a sea ditching before they managed to regain sufficient control to land at Beja nearly 2h after take-off.

While Portuguese investigation authority GPIAAF has primarily attributed the serious incident to the maintenance blunder, it has also noted that the final line of defence – the crew’s pre-flight check – did not catch the problem. 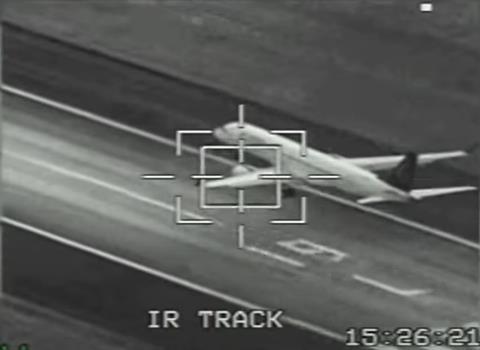 Embraer’s cockpit instruments include a multi-function display screen which features a synoptic page. This contains a diagram of the aircraft – as it would appear from behind, looking forwards along the fuselage axis – and graphic depictions of the flight-control surfaces, including the ailerons, rudder, elevators and spoilers.

When the control yoke is manipulated, the corresponding control-surface graphics respond on the screen. The pilots use the synoptic page during the after-start checks to ensure the control surfaces are responding correctly to the yoke movements.

As the yoke is turned, green graphic representations of the surfaces, showing their direction of deflection, appear on the diagram. Surfaces failing to deploy are shown as orange graphics.

Air Astana’s standard operating procedures, based on Embraer’s recommendations, required the left-hand pilot to select the synoptic display before carrying out a check for smooth and continuous movement of control surfaces, from neutral to full deflection each way.

But the inquiry says the standard procedure “lacked detail”, specifically regarding the direction of the controls, which “did not allow” the crew of the affected aircraft to detect the misconfigured ailerons.

While the procedure had “weaknesses”, the inquiry also points out that the mandatory control check is a frequent and “highly routine” exercise, carried out before each flight. Given that any system failure or misconfiguration is unlikely, it states, pilots can “easily” miss interpreting whether the aileron surfaces are deflecting in the correct direction.

No details on the crew’s pre-flight check, from the cockpit-voice or flight-data recorders, have been disclosed by the investigation. 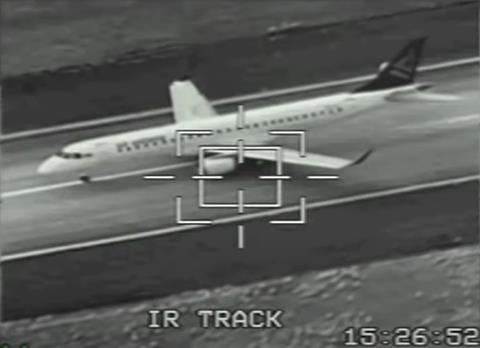 Although the heavy maintenance had involved substantial adjustment to aileron mechanisms, the crew of the aircraft was “not generally aware” of the scope of the work or the systems disturbed, the inquiry says.

Nor had Air Astana provided guidance to its crews on accepting an aircraft which had just undergone particular maintenance procedures – a measure not legally required but nevertheless considered ‘best practice’.

Air Astana insists that the “root and primary cause” of the incident was “systemic organisational and procedural failures” at OGMA, which led to the “near-fatal mistake” of incorrect aileron cable installation.

But it concedes, in comments to the inquiry, that “an opportunity to detect” the misconfiguration “was missed” by the crew during the after-start checks.

In the aftermath of the incident, says the inquiry, the airline has reinforced the “visualisation and interpretation” of the control surface positions during pre-flight checks, to focus more attention on their response to yoke commands. The procedure includes a call-out by the left-seat pilot.

Air Astana has also modified crew briefings to cover non-revenue flights after maintenance work, and introduced an aircraft acceptance checklist for pilots – including details of systems affected – for use after significant maintenance intervention.

Investigators have pointed out that the maintenance personnel could have used the synoptic page display, as well as observation of the ailerons’ physical deflection, to check the correct installation of the aileron cables before the aircraft was released from service.