Crashed Convair came down about 1km from runway

Details are still emerging from the Convair freighter crash outside Toledo Express airport but the impact site appears to be about 1,000m from the threshold of runway 25.

The aircraft – provisionally identified, but yet to be confirmed, as a Convair 440 registered N24DR – came down apparently after a flight from Millington, just north of Memphis. 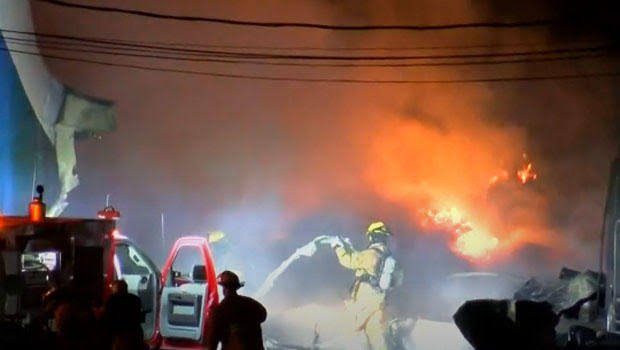 Images from the scene indicate the aircraft has been completely destroyed, but there is no confirmed information on the crew.

The aircraft was reportedly transporting automotive parts and came down in a diesel vehicle repair facility, which is situated some 1,000m ahead of runway 25, and is said to have struck at least two large trucks before being consumed by fire.

Weather conditions at the time of the accident, which occurred in darkness at around 03:00, indicate winds from 230-240°, which would suggest approaches would have been conducted to runway 25.

US FAA records list N24DR as having serial number 393, and that it is privately-owned by an individual in Laredo, Texas. The FAA does not indicate the year of manufacture.