Investigators have determined that the complex failure of a Pakistan International Airlines ATR 42-500’s left-hand engine preceded a loss of control which developed into a stall, loss of altitude, and eventual fatal collision with terrain.

At one point in the accident sequence the aircraft inverted as it underwent a full 360° roll to the right, continuing to roll another 90° before banking left until it was wings-level – losing some 5,100ft in height overall.

The ATR (AP-BHO) had been operating from Chitral to Islamabad on 7 December 2016, its sixth flight of the day, with 42 passengers and a crew of five.

It believes the blade “probably” fractured or dislodged during the previous flight, from Peshawar to Chitral. 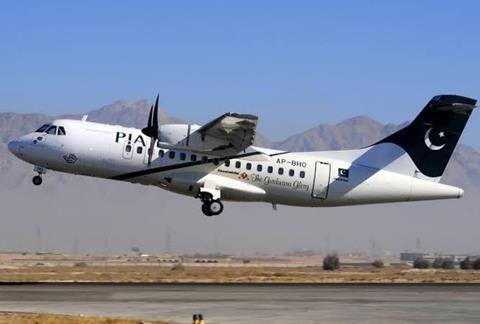 The engine had been installed three weeks earlier, having been taken from another of PIA’s ATRs (AP-BHP) during unscheduled maintenance. During this work the power turbine assembly was removed.

But while the turbine blades had passed the 10,000h criteria for replacement, the inquiry says they “were not replaced”. The engine operated for a further 93h before the onset of the emergency.

Over the initial 26min of the flight to Islamabad – with the ATR cruising at 13,500ft – there was evidence that the left-hand propeller’s speed governing accuracy had degraded, but this was not noticed by the crew. The aircraft was cruising at 186kt instead of the expected 230kt.

The inquiry says a series of technical malfunctions then occurred to the engine and its propeller control system.

Fracture of the turbine blade unbalanced the power turbine, and the situation was further complicated by another latent problem, a broken pin in the engine’s overspeed governor, as well as oil contamination.

The resulting technical malfunction generated an increase in propeller pitch and an unusual decline in propeller speed – from the cruise level of 82% it fell to 62%.

“Due to this combined technical anomaly, during following parts of the flight, the conditions were exceptionally difficult,” says the inquiry, pointing out that the aircraft suffered “uncontrolled variation” in its propeller speed and blade pitch.

Propeller speed increased to 102%, before falling, while the blade pitch reached a point possibly close to the feather position. The propeller speed unexpectedly increased again, corresponding to an unfeathering, reaching 120-125%.

The left side of the aircraft produced “high drag values”, says the inquiry, while the crew had not responded with sufficient power, resulting in falling airspeed and the aircraft flying on the verge of stalling, at around 120kt, its stick-shaker activating.

Advancement of power on the right-hand engine, it says, coupled with “excessive” right rudder to counter the asymmetric condition, coincided with an “abrupt” fall in the left-hand propeller speed.

“A considerable amount of drag was eliminated from the left side of the aircraft,” says the inquiry, and the crew’s efforts to maintain directional control suddenly became “surplus to the requirement” – resulting in a sharp yaw to the right, the inverting roll and rapid descent, the aircraft losing 5,100ft before recovering at 8,350ft.

“This had immense psychological impact on the cockpit crew, and it impaired their capacity to perform normally,” says the inquiry.

After the recovery, complex simulations indicate the aircraft’s propeller blades might have settled at a low pitch while rotating at about 5%, generating stable drag forces on the left side.

But the aircraft’s behaviour was different to that which would have been expected during a standard in-flight shutdown and single-engined operation, with propeller drag some seven times more than it would normally produce once feathered.

“In this degraded condition it was not possible for the aircraft to maintain a level flight,” says the inquiry. It could only fly in a gradual descent of 800-1,000ft/min at around 150-160kt.

Directional control was possible with “substantial” right rudder and right aileron inputs, it adds, but the pilots were “unable to judge” the nature and extent of degradation in the aircraft’s aerodynamic performance. When the crew attempted to reduce the rate of descent, the airspeed also began to fall.

Despite progressively-increasing control inputs to the right, the aircraft entered a continuous left turn, approaching high terrain and triggering ground-proximity warnings. The airspeed declined and the aircraft stalled at 4,280ft – just 850ft above ground – rolling 90° to the left and pitching 23° nose-down before striking a mountain base 42min into its flight.

None of the occupants survived the impact, some 24nm north of Islamabad airport and 3.5nm south-south-east of Havelian. 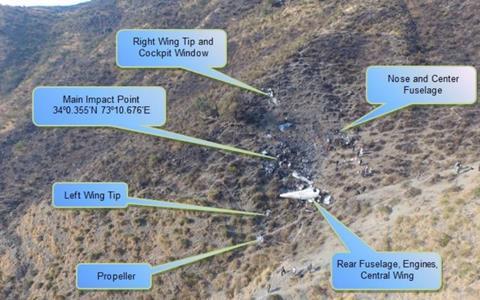