US investigators have found that aggressive control inputs to increase poorly-monitored airspeed resulted in injuries to three flight attendants on an American Airlines Boeing 757-200 descending to New York JFK.

The incident occurred as the aircraft was arriving from Edinburgh on 6 September 2018.

According to the newly-released final conclusions from the US National Transportation Safety Board, the autopilot’s ‘altitude hold’ mode engaged as the 757 neared its pre-selected altitude of 12,000ft having descended from 24,000ft.

Some 16s later the aircraft’s altimeter setting changed – from the standard cruise setting of 1,013mb to 1,020mb – and this caused the altimeter immediately to display a higher altitude of 12,100ft.

The captain, who was flying, opted to re-acquire the desired altitude of 12,000ft by selecting ‘flight level change’ mode and the autothrottle responded to enable the aircraft to descend.

But the crew also chose to decelerate slightly, from around 255kt, by selecting an airspeed of 250kt – which caused retardation of both thrust levers. When the thrust levers reached their aft stop, the autothrottle entered ‘throttle hold’ mode.

The cockpit crew, which included the two pilots and an international relief officer on the jumpseat, undertook an approach briefing during which air traffic control cleared the jet to descend to 7,000ft.

Investigators found, however, that the aircraft – still in ‘flight level change’ mode – was trying to maintain its selected altitude of 12,000ft having reduced thrust. The airspeed started bleeding away and the 757 pitched nose-up to try to hold altitude.

The inquiry says the relief officer remarked three times in succession about the declining airspeed, over the space of 5s, and recorded data showed it had fallen to 186kt.

Thrust levers were suddenly advanced, the autothrottle exited ‘thrust hold’ mode, and the engines powered up.

“Push, push it over. Get the autopilot off, push it over,” the relief officer stated loudly, concerned that the airspeed was “dangerously low”. 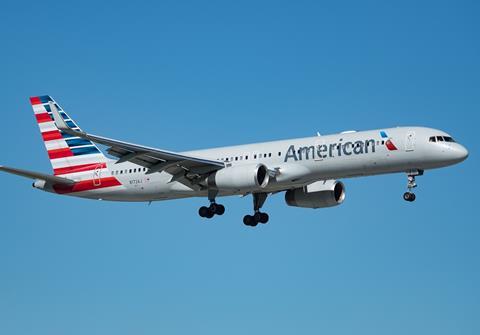 As the aircraft, similar to this one, tried to hold altitude its airspeed bled away

Both the autopilot and autothrottle were disengaged and, with the aircraft 10° nose-up, the control column was moved quickly forward to command nose-down attitude.

“These aggressive manoeuvres caused the flight attendants in the aft galley to be thrown against the ceiling,” says the NTSB. One of them suffered a fractured arm, and two others were injured.

The pitch varied between 10° nose-up and 3° nose-down, with fluctuations between positive and negative g-forces over an 11s interval before the airspeed, pitch and control column positions stabilised and the jet started descending to 7,000ft.

It subsequently landed without further incident. None of the 104 passengers or the other six crew members was injured.

The captain had accumulated over 13,600h on type while the first officer had 565h.

Investigators state that the crew’s failure to monitor the airspeed adequately led to aggressive control inputs in an effort to accelerate, resulting in the injuries to the cabin crew.