Portuguese authorities have opened an investigation after a Boeing 737-400F was cleared for take-off on a Porto runway occupied by an inspection vehicle.

The aircraft, operated by ASL Airlines Belgium on behalf of FedEx, had been accelerating along runway 35 at night on 27 April.

Portuguese investigation authority GPIAAF estimates, from preliminary analysis of NAV Portugal ground radar information, that the jet was 300m from the vehicle when it lifted off.

Just over 10min beforehand the vehicle had been granted clearance by the controller to enter the runway for an inspection, the fourth of the day, says GPIAAF.

The 737 (OE-IAJ) had travelled along taxiway D for an intersection departure. This intersection is about 550m north of the runway 35 threshold. 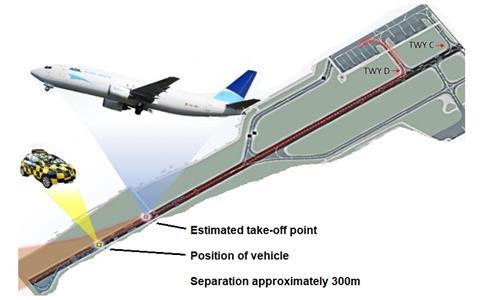 Source: Based on GPIAAF illustration

GPIAAF says the aircraft was instructed to line up on the runway and – after the crew had signalled readiness – was cleared for take-off by the tower controller.

“At that moment the follow-me vehicle was still on the runway,” it states, heading south from the opposite-direction threshold of runway 17.

The vehicle’s single operator “noticed some strong lights on the runway centreline…that seemed to be in motion”, says GPIAAF. It gives the time of the incident as 20:48.

“For that reason [the operator] contacted the tower via radio, questioning if there were any aircraft lining up on the runway,” it adds. “The [controller] confirmed an aircraft was rolling to take off and requested the follow-me to [immediately] exit to the left edge of the runway.”

Investigators state that the 737 crew noticed white lights on the runway, after receiving take-off clearance, which were “confused” with other runway lights in the dark environment.

After take-off the crew queried the controller and was informed that a “misunderstanding” had occurred, says GPIAAF, which was notified of the incident by the Porto airport operator the following day. Neither the two 737 occupants nor the vehicle operator was injured.