Ground crews at the UK’s East Midlands airport failed to complete their tasks before a Boeing 737-400 freighter taxied over a towbar shortly after pushback for a flight to Vitoria in Spain.

The Swiftair aircraft (EC-MIE) suffered damage to two main landing-gear tyres which had to be replaced, causing a 4h delay to the jet’s departure.

According to the Air Accidents Investigation Branch, the 737-400SF had been pushed back from stand 99 at night on 16 June last year.

The ground crew’s headset operative placed a chock in front of the nose-wheel while the towbar – already detached from the tractor – was disconnected from the aircraft.

After the tractor was turned around, its driver began to re-attach the towbar, but was distracted when he saw the headset operative walking away from the aircraft without the chock, which would normally have been retrieved and stowed on the tractor.

The driver removed the chock himself before properly securing the towbar to the tractor. As he drove the tractor away, the towbar was left in front of the aircraft. 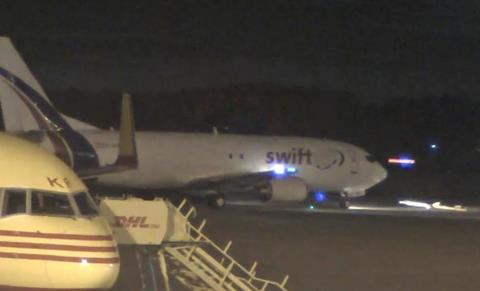 Although the headset operative gave the 737 crew a visual clearance signal, before climbing into the tractor, he did not check the taxiway was clear.

The aircraft crew received taxi instructions for runway 27 but, as it began to move, the jet’s left main landing-gear ran over the towbar.

Having learned that the towbar was not attached to the tractor, the driver returned to stand 99 alone – entering the taxiway without permission – and located the towbar, which had been damaged during the incident.

Only after the aircraft had reached a holding point for the runway was its crew informed about the incident and the need for an inspection.

“Fortunately, the damaged towbar was found before [departure] avoiding the aircraft taking off or landing on damaged tyres, the result of which may have been more serious,” says the inquiry.

The tractor driver appeared to have “prioritised” removal of the forgotten chock over ensuring the towbar was securely attached to the tractor, it adds, possibly because he had previously witnessed an aircraft taxi over a chock.

As a result of the incident the handling agent has reviewed the roles of tractor drivers and headset operatives, and amended procedures to clarify their responsibilities and ensure that checks are carried out to confirm the area in front of the aircraft is clear.