French investigators have found that an Air France Airbus A330-200 crew did not follow standard procedures for a fuel leak, choosing not to shut down the affected engine before diverting to an airport with a shortened runway and suboptimal weather conditions.

The aircraft had departed Brazzaville for Paris Charles de Gaulle on 31 December 2020.

Some 35min after take-off, in cruise at 38,000ft, the crew noticed that the fuel level was 1.4t lower than it should have been. No operational issues were evident with the General Electric CF6 engines.

The captain left for a rest break, instructing the first officer and relief pilot to monitor the fuel in his absence.

About 20min later the pilots called the captain back to the cockpit because the discrepancy had increased to 2.1t.

Suspecting a problem with the left-hand engine, the crew commenced ‘fuel leak’ procedures, which required the engine to be shut down.

But French investigation authority BEA says the captain instead deliberately chose to leave the engine running.

“This decision was not called into question by the [other pilots],” it says.

BEA points out that engine shutdown is part of the procedure because it is intended to preserve remaining fuel and prevent the risk of fire.

“This decision [not to shut the engine down] created a significant risk of fire and resulted in a significant reduction the safety margin of the flight, fire having been avoided by chance,” it adds. 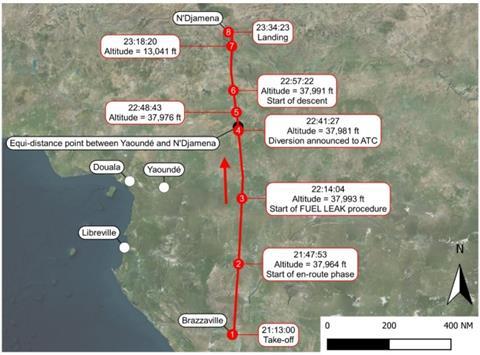 BEA also states that the crew, contrary to procedures, did not plan to land as soon as possible. A return to Brazzaville was not considered.

At the time the crew began the ‘fuel leak’ procedure the aircraft was 250nm east of Cameroon’s Yaounde airport and 520nm south of N’Djamena airport in Chad.

While both airports were accessible, and Yaounde was closer, the crew considered N’Djamena to be more “welcoming”, says the inquiry, and a call to the operational control centre appeared to support the decision to divert to N’Djamena.

Only after selecting N’Djamena as a diversion airport, and starting the descent, did the crew check a NOTAM which showed the 2,800m runway 05/23 was operating with a displaced threshold that shortened it to 2,410m.

The ILS for runway 05 was also out of service, and the crew opted for an area navigation approach to runway 23 – although this meant landing with a tailwind.

BEA says the aircraft touched down 550m beyond the runway 23 threshold, with a speed 8kt above the approach reference, and a 9kt tailwind component.

Cockpit-voice recorder information shows the runway overrun protection system activated, ordering the crew to apply maximum braking. BEA adds that the system had assumed a 2,800m runway as it had not been updated to account for the reduced length.

The aircraft’s brake temperature rose to 600°C during the landing roll-out.

Both engines were still running when the A330 turned around at the end of the runway, and the left-hand powerplant was not shut down until 3min after landing. The right-hand engine was only shut down after 13min, before firefighters began to direct water under the left-hand engine.

None of the 147 passengers and crew members was injured. 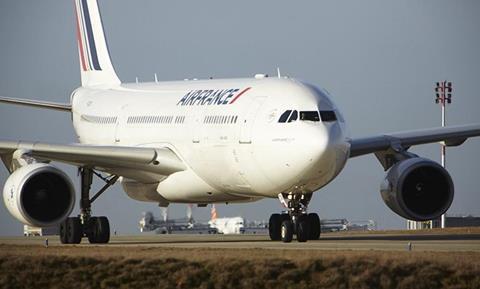 Analysis showed the A330 had lost 5.7t of fuel during the 2h 21min flight, between take-off and complete engine shutdown, including 5.3t while airborne.

High saturation of air with fuel in the engine probably prevented the emergence of fire during approach and on the ground, says the inquiry.

Inspection of the left-hand engine traced the fuel leak to a flange of the main fuel line between the pylon and the engine.

Three months before the incident the A330 (F-GZCJ) had undergone ‘long interruption’ maintenance, including removal of both engines, at the Chinese HAECO facility in Xiamen.

Although this work was completed on 30 September 2020 – with no fuel leaks detected – the twinjet did not fly until 26 December. It only conducted six flights prior to the incident, with no anomalies, and flight-data recorder information showed no indication of any fuel leak.

But BEA says the re-assembly of the main fuel line is tricky, with particularly difficult aspects highlighted in maintenance documentation.

General Electric emphasises the risk of incorrectly positioning the flange, pointing out that, in such cases, tightening bolts can “temporarily” ensure a seal but adding that vibrations – especially with the engine operating at high thrust – can subsequently result in the components shifting, leading to a leak.