UK investigators believe a Diamond Aircraft DA40, piloted by a flight instructor, failed to recover from a stall after take-off because a container of de-icing fluid stored in a cockpit footwell jammed the control stick.

The aircraft had been loaded with five de-icing fluid containers ahead of a flight from Cranfield airport to Bournemouth on 12 December 2020.

This left the DA40 close to its maximum permitted take-off weight and aft centre-of-gravity limit.

According to the Air Accidents Investigation Branch, the aircraft’s weight and balance were nevertheless within range, and more than enough take-off distance was available.

“The pilot should have had sufficient skill and experience to operate the aircraft under such conditions if it were capable of being operated normally,” it says.

But it notes that the aft centre-of-gravity would have “exaggerated” any nose-up tendency after take-off, and the ability to command nose-down was significantly restricted by the position of the fluid container. 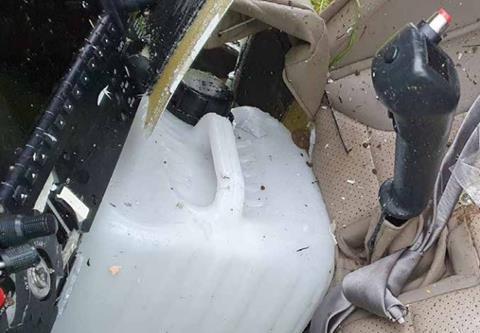 “It is possible that the absence of full and free movement was masked, as contact with the container was probably with the base, rather than the top, of the control stick,” says the inquiry.

“This might have given the impression that the stick had reached its natural full-forward position, unrestricted by the container.”

The inquiry could not determine the DA40’s speed at lift-off but, as a result of the inadequate control, it could have become airborne below its correct rotation speed – with a corrective nose-down pitch input to avoid a stall made “difficult or impossible” by the restricted stick movement.

“While the pilot had previously demonstrated his proficiency at stall recovery, the restriction caused by the container would have prevented him reducing the angle-of-attack to recover,” it adds.

Surveillance cameras captured the single-engined aircraft’s wings rocking and then dropping, about 5s after take-off. The DA40 reached a height of 100-200ft, before descending in a left turn and crashing adjacent to the runway about 12s after becoming airborne.

Its pilot, while seriously injured, survived.

The flight had been undertaken on behalf of a flight-training organisation, and the inquiry uncovered a number of weaknesses in the operation.

It points out that the five de-icing fluid containers had not been secured for the flight, and that their carriage was contrary to the organisation’s prohibition on transporting dangerous goods. The fluid had probably been incorrectly classified by its manufacturer, the inquiry says.

Investigators also found that aspects of the organisation’s management created circumstances in which staff would find ways to address “shortcomings” in the operation – such as during the conduct of the DA40 accident flight.

“This probably contributed to the circumstances of this accident,” says the inquiry.